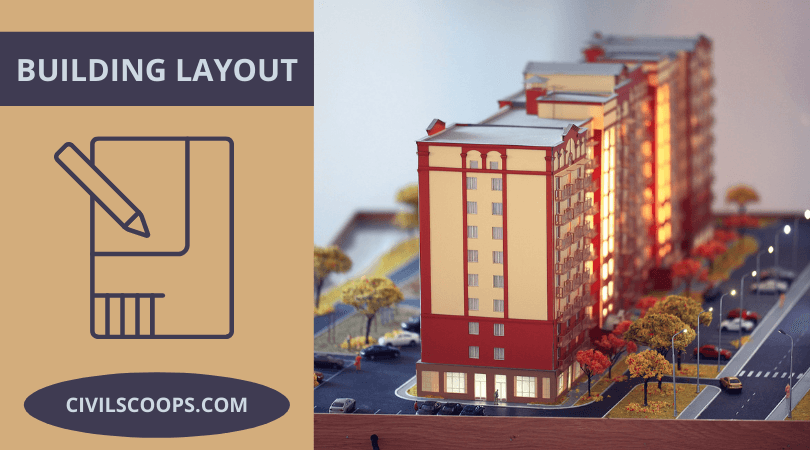 The true intention and intent of setting out (layout) are to move the plan, length, and width of the base on the ground so that the foundation can be excavated for the construction of the intended building according to the drawing.

Before actually preparing the construction of the building, the following preliminary works should be completed.

A building’s or structure’s layout depicts the plan of its base on the ground floor, as shown in its plans so that excavation can be carried out precisely as needed and the building’s location and orientation can be precisely defined. It is laid out in accordance with the engineer’s or architect’s foundation plan sketches and requirements.

To comprehend the architecture or setting out of a building, we must first comprehend some of the technical terms used in this field, which are listed below. 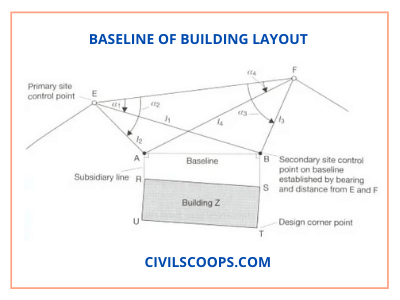 A baseline is a straight reference line that indicates where the building’s corners are on the field. It may be the outer border of a lane, a curb, the area’s boundary, or simply a line connecting two lines.

Horizontal controllers are points whose co-ordinates are defined in relation to a given location. These points are then used in a variety of ways to find other points on a layout, such as corners. There should be several control points to allow each point of the foundation design to be precisely placed on the earth.

Vertical control points of known point compared to any given vertical datum are defined such that design points upon on work could be located at their correct levels. Vertical controls can be made out of 20mm diameter steel bolts that are 100mm long and forced into existing stairs, ledges, footpaths, and other structures with established reduce thresholds. 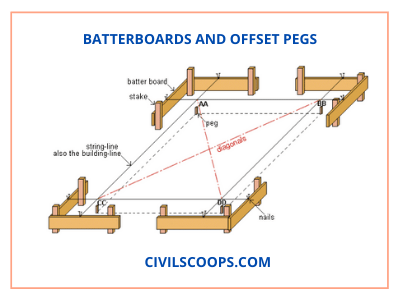 Once the pattern points are located on the earth, pegs are pushed into the ground at that location. The corner pegs will be lost once foundation excavations started. Offset pegs are used to eliminate these additional pegs. Batter boards are usually erected near each offset peg and used to reposition the points after the dig is completed.

How to Building Layout 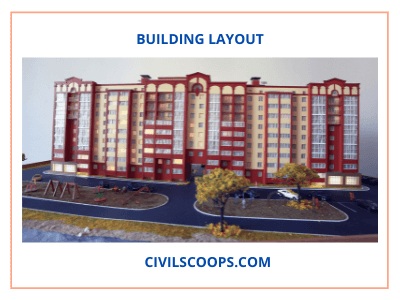 For a building’s demarcation, the protocol outlined below is advised.

What Is Method of Layout of Building?

A line attached to corner posts marks the shape of a basic building layout, such as a rectangle. A nail in the top of the post may be used to connect the line to. To transform off 90-degree angles for the remaining corners, use a theodolite, site square, or builder’s square. To create a straight line between corner posts, ranging rods may be needed.

Corner posts are usually 50 x 50mm timber posts with a nail in the centre pushed squarely into the stone. Dry lime or a related powder may be used to draw the outline on the stone. At the corners, timber profile boards may be used. Profile boards are usually 0.6-1m tall and made up of two 50 x 50mm posts and a 150 x 38mm crossboard pushed at least 600mm into the deck.

The scale, form, and orientation of the excavation, as well as the width and location of the walls, are all determined by trench configuration. After the building outline has been created, trenches are dug. For accurate hand excavation, the diameter is always indicated with a line of dots of dry lime powder, while the centre line is marked for accurate computer excavation.

Outline profile boards are often used to monitor trench distance, depth, and positioning. Profile boards should be placed at least 2 metres away from trench positions such that they do not impede construction activity. The profile crossboard’s level should be tied to the site datum and set at a suitable height above ground level, usually with cords strung between two profiles at either end of the trench. For identifying purposes, bands may be drawn on the crossboard.

Pegs are often pushed into the trench’s bottom to mark the top of the concrete strip that will be poured later.

With the aid of a spirit stage, the corners of walls are moved from intersecting cord lines to mortar

Spots on the Concrete Foundations.

Trenches must be cut with extreme caution, particularly if they are to be left open for a prolonged period of time, as the sides can cave in.

Working from a baseline, the overall outline of a reduced level region can be established. Corner posts are secured to the excavation area’s outline, which is outlined with dry sand or similar material. Sight rails are placed at a suitable height and in places that enable a traveller to be used to monitor the depth of the excavation.

A traveller is a fixed-height profile board that is used to monitor excavated levels between profile boards. It is easy to see whether or not the excavation has been carried out to proper levels by having the traveller in the sightline between two level boards. The traveller’s height is equal to the sight rail’s desired level minus the excavated area’s formation level.

Framed structures are commonly based on a grid and are often measured from a baseline. Isolated or pad foundations have their centre points marked by the intersections of the grid lines.

A theodolite is used to map out the grid, and pegs are used to locate the grid intersections. Offset pegs or profiles should be fixed independent of the future excavation activity until the grid has been laid out. A traveller sighted between sight rails or a level and workers tied to a site datum may be used to monitor excavation depth.

Construction planning, also known as construction staking or site layout survey, is a method in which a builder reads the building plans (blueprints) and then marks the positions of all items on the construction site with stakes. These would include the house itself, as well as the septic system and well location.