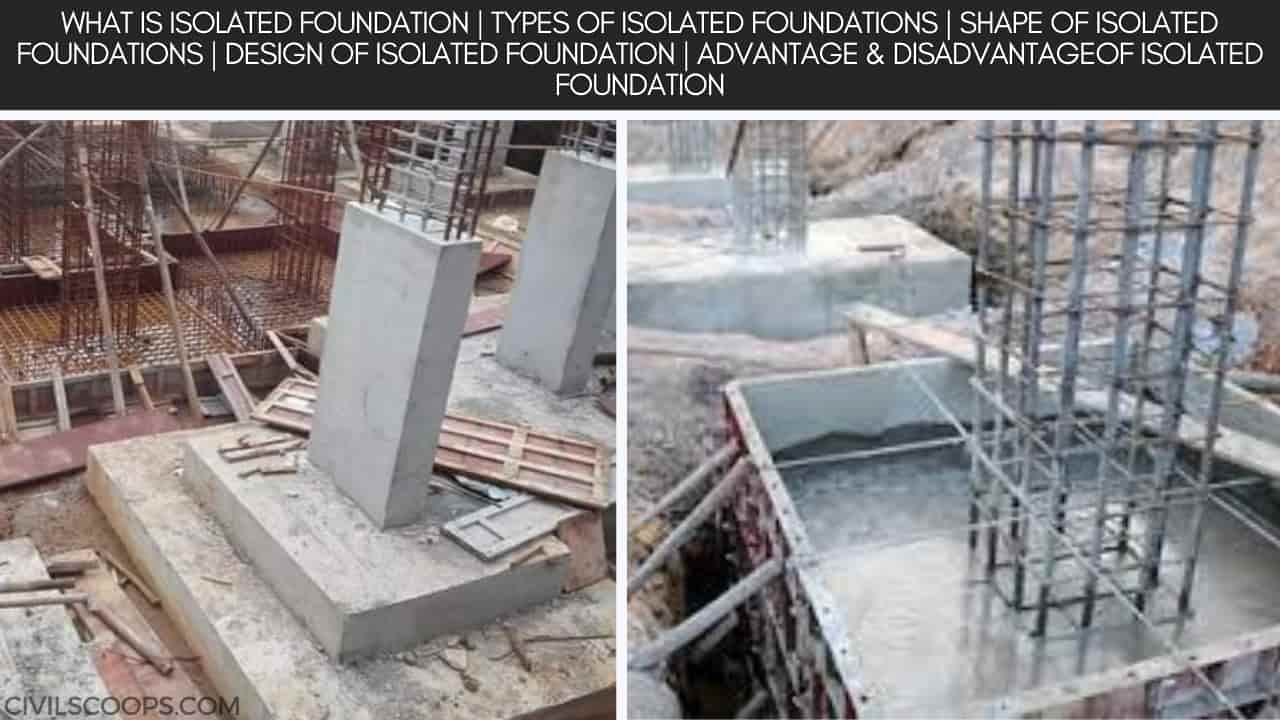 What Is Isolated Foundation?

Isolated foundations are structural components often used to distribute and deliver loads of individual columns to the soil and without exhausting its bearing capacity, in addition to avoiding undue settling and as well as ensuring sufficient protection against both slipping and trying to overturn.

These are often used in the presence of light column loads, where columns are never closely spaced, even in the case of strong homogeneous soil.

A 15 cm offset is usually given on all sides of the concrete bed. In the situation of brick masonry columns, an offset of 5 cm is often given on all 4 sides in usual layers. Where the base of concrete columns is a slab, steeped, or slopestyle.

There have been different kinds of isolated foundations, including such spread foundation, stepped foundation, sloped foundation respectively. Typically they are square, rectangular, or circular in form. Every other form of foundation is chosen on the basis of the ground conditions as well as the specification of the load applied.

Isolated foundations are one of the most affordable types of foundations that are used where columns are placed at comparatively vast distances. 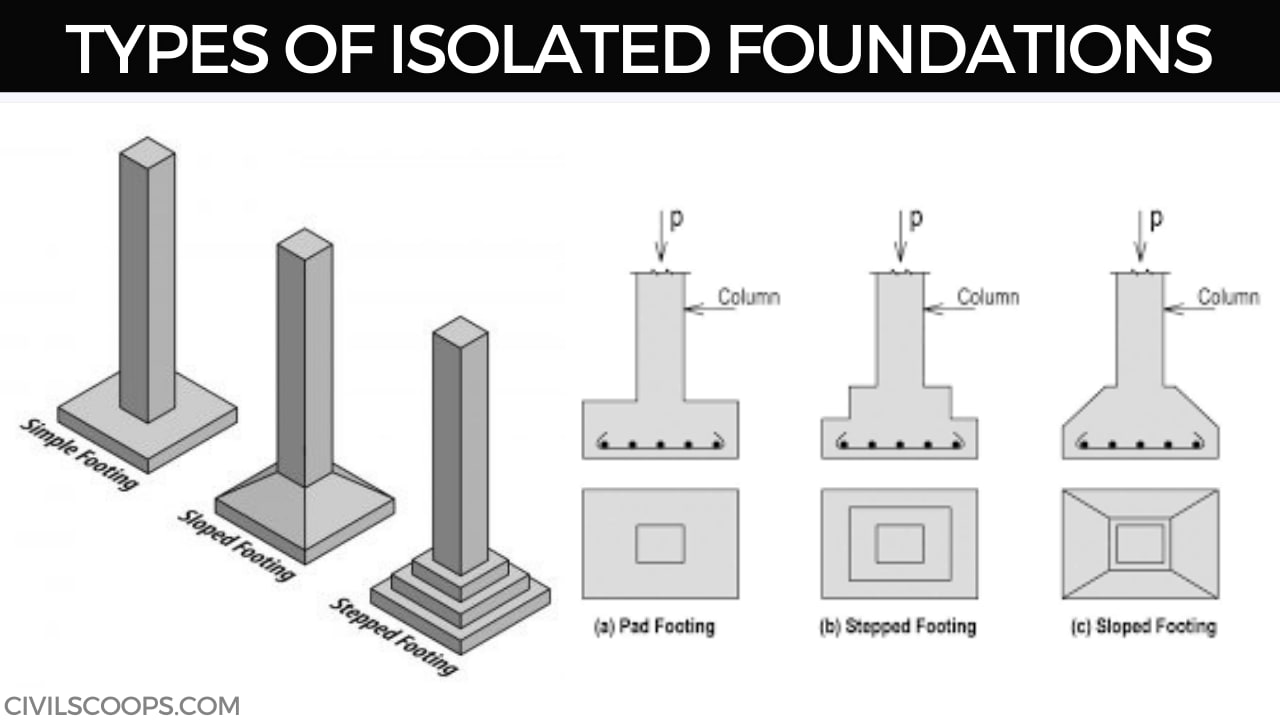 Different types of isolated foundations are as follows.

It is built separately below each column and seems to be normally square, rectangular, or circular in form. The size of the smooth, isolated base is uniform.

It is given in such a way as to minimize the bending moments and the shearing forces in those important components. This can be made from plain concrete or reinforced concrete to maximize the ultimate load strength.

The sloping or trapezoidal foundations are built then performed with the utmost care to achieve a top slope of 45 degrees across all directions. The quantity of reinforcement and aggregate used during the slope construction is much less than a flat, isolated base. It thus reduces the use of concrete and reinforcement.

Originally, the construction of such an isolated foundation was common, but its use has deteriorated lately. It is commonly used during the design of residential buildings.

Stepped foundations are placed as move over each other. And furthermore wide, three concrete cross-sections are piled together to form steps.

Often two or three foundations will be combined and the neighboring foundation may be nearby if shuttering is not feasible even for a particular procedure. The combined foundation can accommodate over one column which can be effective because its two columns are really similar in that the single foundation cannot be used or is situated at or near the property line.

The combined base is normally supported by two or three columns, not in a row. Combined bases are used where even the bearing areas of widely spaced columns intersect.

The shoe leg is a half-length cut-out mostly from an original foundation that has a shoe shape. This is given in the corner of the story. Since there is no allowance for a setback area. These are built on the boundaries of the land. Column shall be provided or filled at the edges of the base. 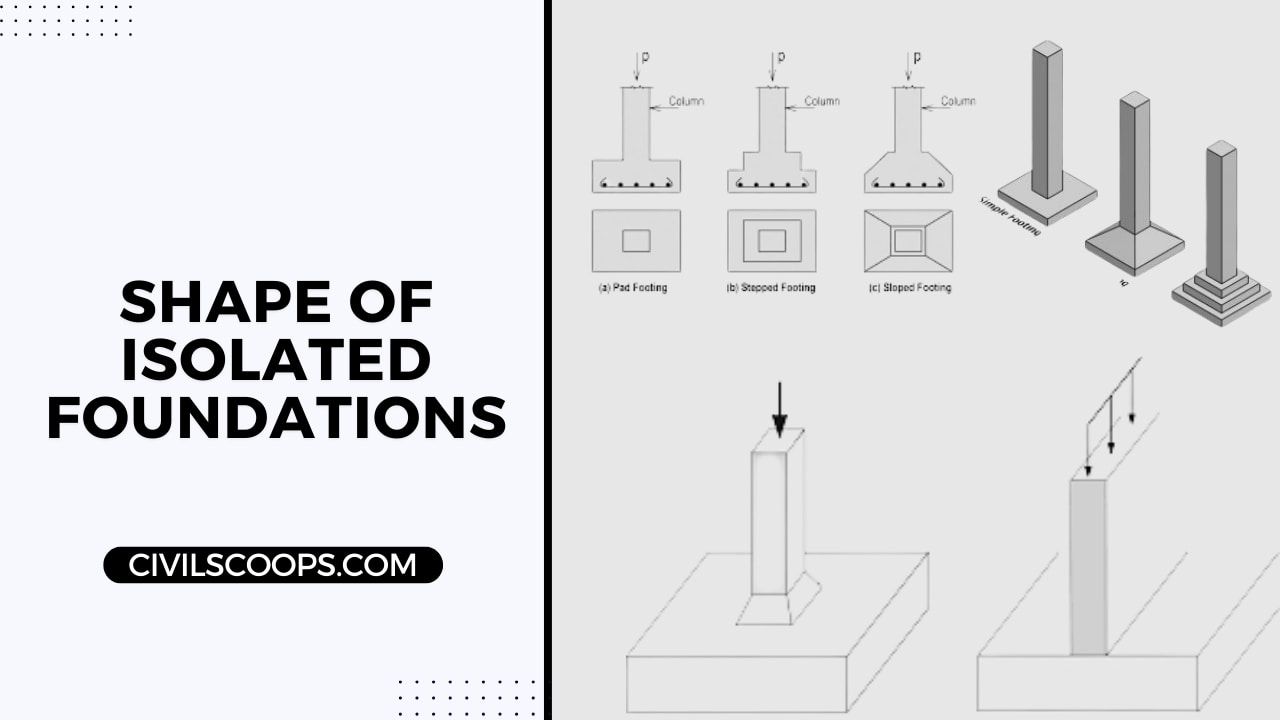 This form of the foundation has a square form. They’re growing on stable soil. When you’ve got a square shape, use this kind of foundation.

This would be the form of an isolated foundation. This form is rectangular in shape. Whenever we need a rectangular shape, use this kind of form.

This is also the form of an isolated base. This form is oval in shape. We need a circular column form, so we need to use this type of shape. It is given where the outside column is adjacent to the boundary or property line, and therefore, there is no space for projecting far beyond the surface of the column. Shoe bases are installed whenever the soil bearing potential is 24 Kn/m2 standard.

The purpose of the Isolated Foundations plan is to develop:

The Design Measures taken in the Foundation Design are as follows :

As the isolated foundation creates, they do have some factors to do so,

The advantage of an isolated foundation are as follows.

The disadvantage of an isolated foundation are as follows.

Use of Isolated Foundation

The users of an isolated foundation are as follows.

In the construction of surface foundations, the basic case of isolated bases has three categories of load application:

Isolated footings (also known as Pad or Spread footings) are commonly used for shallow foundations in order to carry and spread concentrated loads, caused for example by columns or pillars. It is able to design the entire footing and to compute settlement, rotation and bearing capacity of the footing.

The soil needs stable all around the base of the structure. To cope with the high load, it can be very large in size. Separate foundations make this design weak against the differential settlement that may affect the building.

Use of Isolated Foundation

Loads on footing consists of load from column, self-weight of footing, and weight of soil above footing. Therefore, total load P = 1100 kN. Size of footing to be designed can be square, rectangular or circular in plan. Here we will consider square isolated footing.