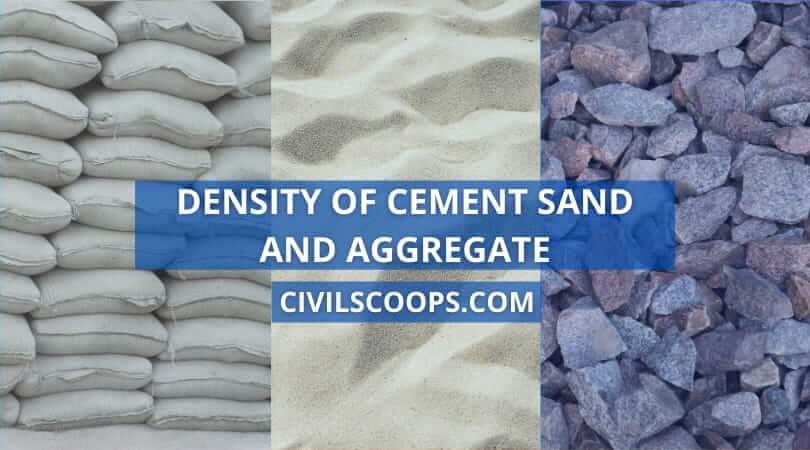 Density of Cement Sand and Aggregate

Cement is a binding particle which is used in construction work to bind the materials, hardens and gains strength quickly.

The density of the material is measured by the following unit-  kg/m3 or lb/ft3.

The density of sand depends on two different conditions, one is dry condition and other is wet condition.

When the sand is in dry condition then the particles are forced to form narrow disposition and the result of this condition cause more volume of the sand.

But when the sand is in wet condition then water is presented in the sand particles and changes the quantity by volume. In wet condition, the volume of the sand density is increased.

In a different state the average density of sand are:

Aggregates are that type of substance which are binded by cement paste to create cement concrete. In the concrete aggregates cover most of the volume in concrete and also takes the strength of the concrete.

On the basis of their size the aggregates are categorized by two parts, those are-

That substance which is retained on IS sieve 4.75mm is referred to as coarse aggregate.

The construction type depends on the size of aggregate such as 20cm is used as mass concrete-like dams, 63 mm is used for plain cement concrete, 20 mm aggregates are used in reinforced concrete work.

Aggregates are generally contains both permeable and impermeable pores, but excluding the pores we say that it is the specific gravity of the aggregates.

Most of the aggregate with kg/m3.

The relative density of an aggregate is based on the dry or saturates surface dry.

Density of Building Materials as Per Is 875 Part-I

Density of Sand: In general, Density can be defined as mass per unit volume/mean particles per unit volume. The sand density varies upon several factors and its conditions. Normal loose dry sand has the density of 1442 kg/m3.

Density of Sand and Aggregate: Density of coarse sand is ranging between 1450-2082 kg/m3 depending on different conditions like wet, dry, loose, dry-packed, and wet packed.

Density of Dry Sand: Normal loose dry sand has a density of 1442 kg/m3.

What Is the Density of Sand?: Normal loose dry sand has a density of 1442 kg/m3.