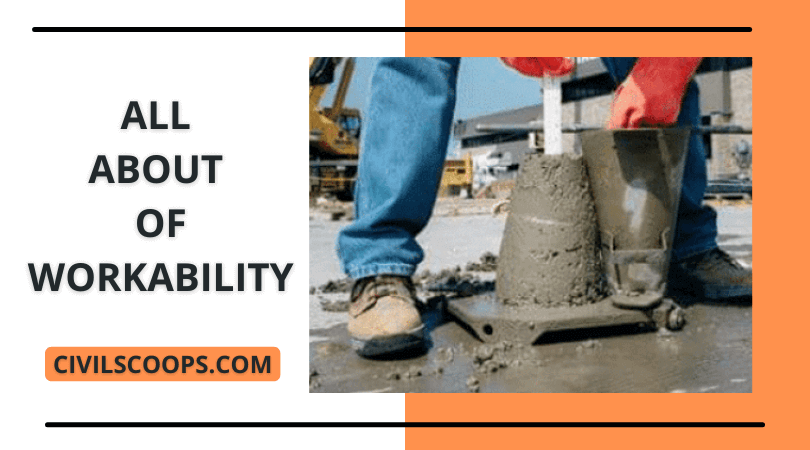 Workability is an essential property of concrete that is related to compaction as well as power. The optimal workability varies depending on the grade of concrete.

Rather than mass concreting, a thin inaccessible portion or highly reinforced section with greater workability is desired. As a result, we cannot create workability standards for various concrete casting projects.

Compaction and workability are linked in every way. Workability is often known as the amount of usable internal work required to achieve complete concrete compaction.

Workability is characterised as the effort needed to manipulate a freshly mixed quantity of concrete with minimal loss of homogeneity – ASTM C 125-93.

The property of freshly mixed concrete or mortar that defines the ease and homogeneity with which it can be mixed, put, consolidated, and finished is known as workability.

What Is Workability of Concrete?

The simplicity with which the concrete materials can be blended, transported, positioned, compacted, as well as completed while losing as little homogeneity as possible. Fresh concrete property demonstrated by the amount of important internal work needed to completely compress the concrete avoiding bleeding or segregation throughout the final product.

According to ACI , “workability of concrete has been the characteristic of freshly mixed concrete that defines the simplicity as well as uniformity at which it can be blended, positioned, consolidated, and finished”.

It is defined by ASTM as “the property deciding the effort needed to exploit a freshly mixed quantity of concrete only with least loss of uniformity.”

What Does Workable Mean?

A concrete is shown to be workable if and only if. It is manageable despite segregation. It can be put without causing any lack of homogeneity. It can be compacted with a certain amount of work. It is simple to complete.

Types of Workability of Concrete

Unworkable concrete is also known as harsh concrete. It is a concrete that has so little water. Hand mixing such concrete is difficult.

Since the cement paste is not sufficiently lubricated to adhere to the aggregates, this type of concrete has a strong segregation of aggregates. Maintaining the homogeneity of the concrete mix is challenging, and compaction of concrete takes a lot of time. The water cement ratio of such concrete is less than 0.4.

This form of concrete workability is being used in the majority of building projects. Such concrete is surprisingly simple to blend, deliver, location, as well as compress despite significant segregation or lack of uniformity.

This kind of concrete workability is commonly used in all light-reinforced concrete construction . For moderate workable concrete, the water cement ratio is 0.4 to 0.55.

Concrete that is highly workable is simple to blend, move, place, and compact in structures. This kind of concrete is used in situations where successful compaction of concrete is not feasible, such as in bulk concrete. Such concrete flows freely and settles with no effort. However, there is a high risk of segregation and lack of homogeneity in this situation.

The gritty aggregates settle to the bottom, and the concrete paste rises to the surface. This type of concrete is used where heavy reinforcement is needed and vibration of the concrete is not necessary. Self-compacting concrete is an example of extremely workable concrete. The water cement ratio of such concrete reaches 0.55.

Workability requirements vary when vibrators are used in design and when they are not used. Similarly, concrete workability in dense sections is unworkable in thin sections.

A higher percentage of cementitious materials typically means higher strength, and much more paste coats the surface of aggregates for smoother consolidation as well as a smoother texture when combined with the appropriate volume of water.

Inadequate hydration results in low strength growth and an unresponsive blend that resists simple positioning and finishing. Excessive water may be said to improve workability because it makes placement and consolidation faster.

The negative effects on segregation, finishing activities, and final power, on the other hand, can be so severe that it should be treated with extreme caution.

The optimal water to cementitious material ratio ( w/cm ) for the manufacture of workable concrete is 0.45 to 0.6.

Elongated, angular, and flaky aggregates are complicated to blend and position because they have a larger surface area to protect, reducing workability.

Rounded aggregates have a smaller surface area yet lacking the angularity required to create tight bonds with the cement paste.

Crushed aggregate in the right proportions improves bonding with the cement matrix and ensures satisfactory workability.

Most admixtures, whether deliberately or unintentionally, change the workability of fresh concrete.

Surfactants, including such superplasticizers, decrease the attachment among cement and concrete particles, providing for more flowable blends without the harmful strength as well as segregation consequences from too much water.

Air entraining additives for thawing longevity yield air bubbles of a balanced scale, which may make finishing easier; however, using more and more results in a messy mix of the contrary impact.

Workability is a property of raw or fresh concrete mixture. In simple words, workability means the ease of placement and workable concrete means the concrete which can be placed and can be compacted easily without any segregation.

What Is Workability of Concrete?

Workability of Concrete is a broad and subjective term describing how easily freshly mixed concrete can be mixed, placed, consolidated, and finished with minimal loss of homogeneity.

Workability is also defined as the amount of useful internal work necessary to produce full compaction of concrete. Workability is the property that determines the effort required to manipulate a freshly mixed quantity of concrete with minimum loss of homogeneity.

What Does Workable Mean?

In simple words, workability means the ease of placement and workable concrete means the concrete which can be placed and can be compacted easily without any segregation. Workability is a vital property of concrete and related with compaction as well as strength.

Types of Workability of Concrete