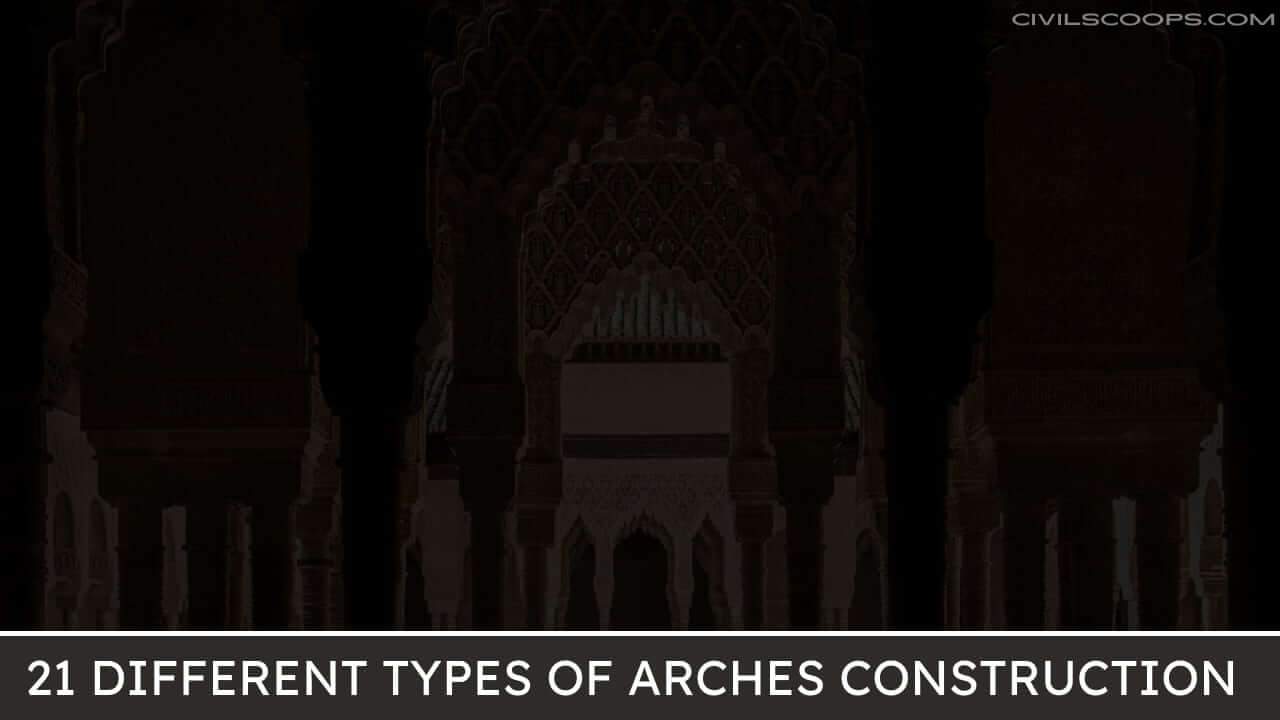 The main function of the arches is to support the load of the portion of the wall which is situated above the openings. In this article, you will get to know the types of arches construction which are generally used in the construction of various structures.

Construction of the arches are required where the span between the two supports is more and the load coming on the supports are heavy. Arches are also used as an Architectural element which will help to improve the aesthetical view of the structure.

The archers are classified on the following factors

According to Type of Material Used for Construction

According to Number of Center’s

The detailed explanation of the classification of types of Arches are as follows.

1. Classification of Arches According to Shape 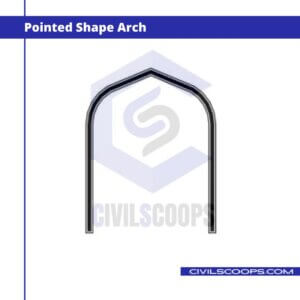 The pointed-shaped arches are also known as the Gothic arch. The pointed shape arch has two arcs of the circle which meets at the apex and forms a triangle. 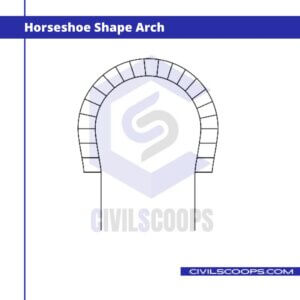 The name of this arch is given horseshoe arch because it’s shape is like a horseshoe that curves more than the semicircle. The horseshoe arches are generally used for architectural provisions. 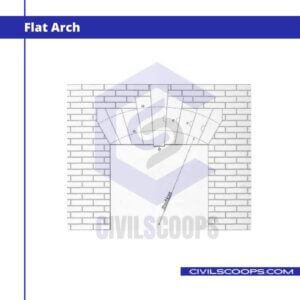 The Flat arch forms an equilateral triangle with Intrados as a base at an angle of 60 degrees. The Flat arch is generally used for the construction of light load structures.

The Extrados in the Flat arches is horizontal and Flat. The intrados is also Flat and given a slight rise of camber of about 10 to 15 mm. 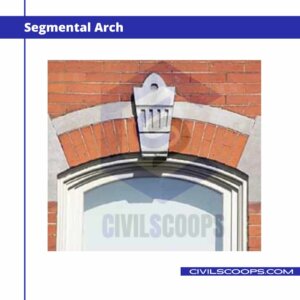 The segmented arch is a type of arch whose circular arc is less than 180 degrees. This type of article known as scheme arch. The segmental arch is one of the strongest arches which has a good ability to resist thrust.

The Romans were the first who developed the segmental arch. This type of purchase generally used in the construction of residential windows and doors within the 20th century. 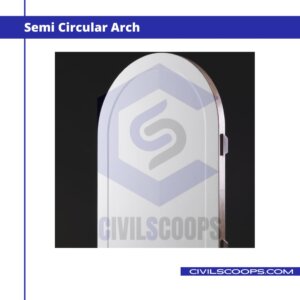 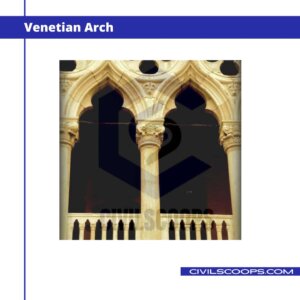 The Venetian arch is a three-centered arch. It is a form of a pointed arch that has a deeper depth at the crown. 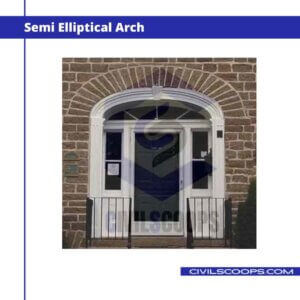 Semi elliptical arch has a shape of a semi ellipse which has either 3 or 5 centers. The semi-elliptical arch is also known as the basket-handle arch. 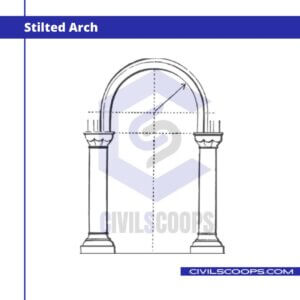 Stilted art the type of art in which the curve begins above the impost line. This arch consists of a semicircular arch with two vertical portions at springings. The centre of the stilted arch lies on the horizontal line. 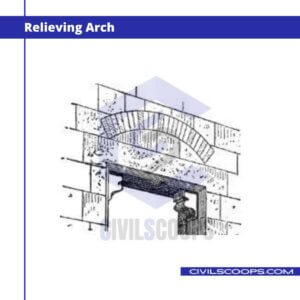 This type of arches is constructed above the Flat arch. The main function of the Relieving arch is to provide greater strength. The ends of this arch should be carried sufficiently into the abutments.

2. Classification of Arches According to Type of Material Used for Construction 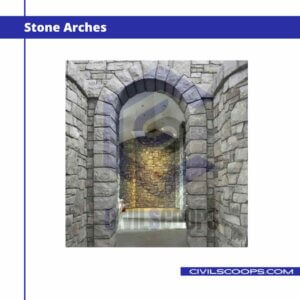 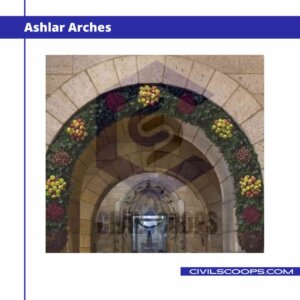 The Rubble arches are used for the construction of arches up to the span of 1m. These types of spans are made of rubber stones that are hammered and dressed properly. The rubble arches are weak and generally used for inferior work only.

Brick arches are one of the common types of arches which are used in construction. This type of art that constructed with the help of ordinary bricks. Cement mortar is used in the construction of the brick arches.

The brick arches are classified into three types

The Rock brick arches are usually wedged in shape. This type of arches is constructed where high accuracy for finishing is not required.

The Fine Axed arches are constructed by setting bricks into the desired shape. In the case of the construction of Fine axed brick arches, the bricks are cut into wedge-shaped properly any three generally used where the Fine work is required.

The finished surface of this type of arches gives a very aesthetical appearance.

It is necessary that the curing of the monolithic concrete block should be done for 14 to 28 days.

In case of the requirements of the keystone, the special type of moulds is prepared for the construction of the precast concrete block arches.

3. Classification of the Arches Based on Number of Centre’s

3.a. One Centered Arches

This type of arches has only one unique centre. The types of arches which comes under the category of types of arches are semicircular arches, Flat arches, horseshoe arches, and segmental arches, etc.

This type of purchase has two centres. The pointed arches comes under the category of two centered arches. Semi elliptical arches also come under this category.

These types of arches have three centres. The elliptical arches and equilateral arches come under the category of three centered arches.

Five centre arches have a total of five centres and it helps in getting a good semi-elliptical shape.

The brick arch is the consummate example of form following function. Its aesthetic appeal lies in the variety of forms which can be used to express unity, balance, proportion, scale and character. Its structural advantage results from the fact that under uniform load, the invoiced stresses are principally compressive.

A pointed arch is an archway with curved sides that meet at a point, rather than a smooth semi-circular curve. This design was first used in medieval Islamic architecture, where engineers realized it concentrated the stress of the building and allowed for taller arches, thinner walls, and much more interior space.

The many forms of arch are classified into three categories: circular, pointed, and parabolic. Arches can also be configured to produce vaults and arcades. Rounded, i. e. semicircular, arches were commonly used for ancient arches that were constructed of heavy masonry.

Round Arch – an arch formed in a continuous curve; characteristic of Roman architecture. arch – (architecture) a masonry construction (usually curved) for spanning an opening and supporting the weight above it.

An arch is a vertical curved structure that spans an elevated space and may or may not support the weight above it, or in case of a horizontal arch like an arch dam, the hydrostatic pressure against it. Arches may be synonymous with vaults, but a vault may be distinguished as a continuous arch forming a roof.