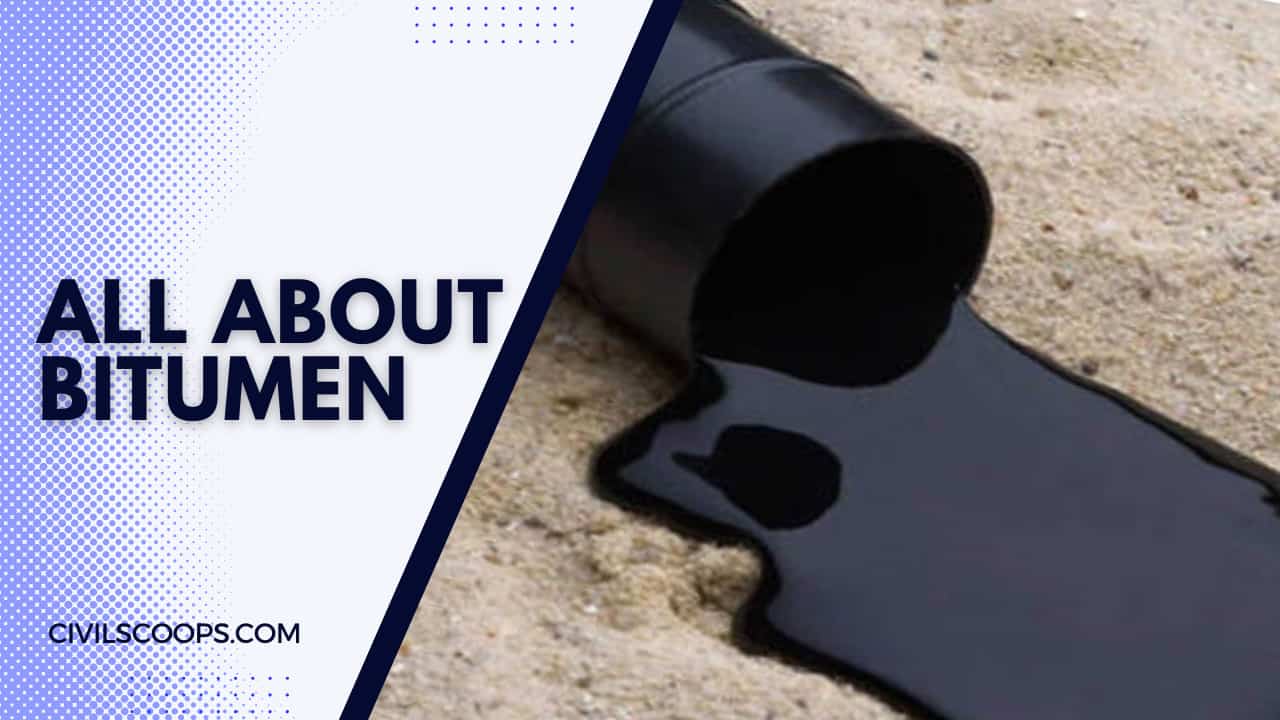 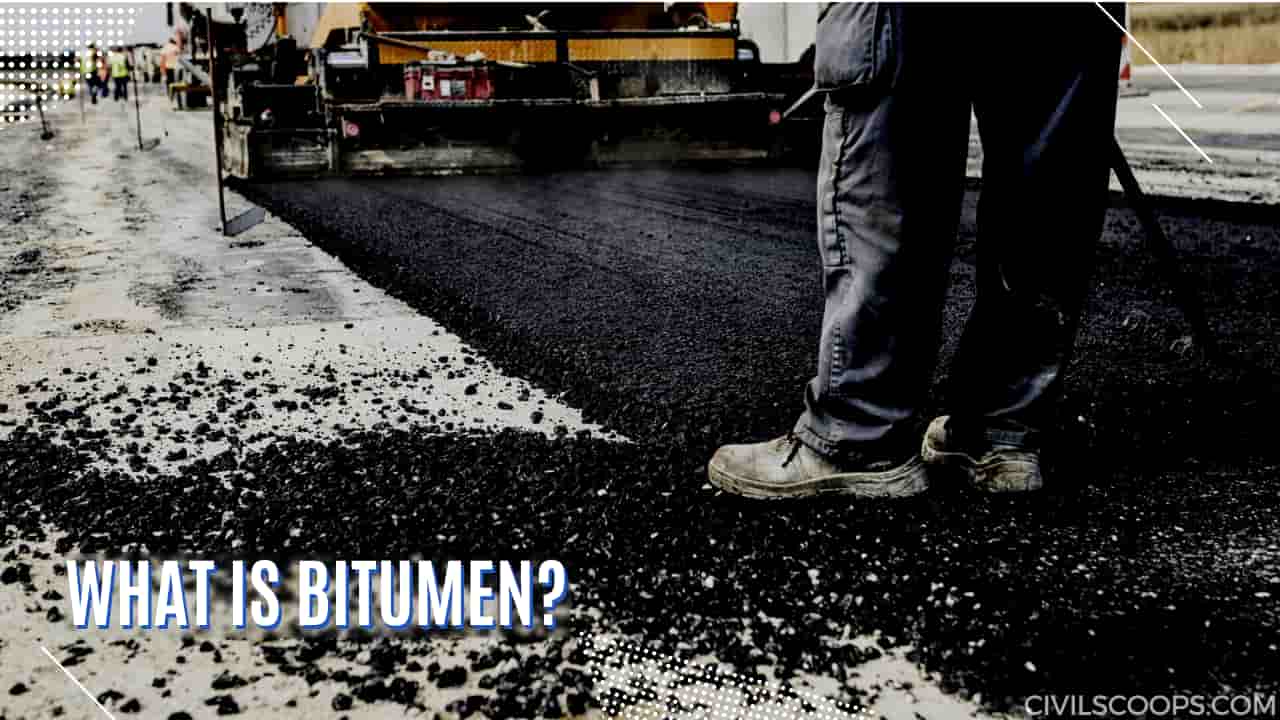 Pure bitumen is a colloid dispersion of microscopic asphalt particles in oil (dispersion agent). The chemical composition of bitumen is a mixture of various hydrocarbons with molecules of sulfur, oxygen, and nitrogen.

Hydrocarbons present in bitumen are mostly condensed aromatic rings and naphthene with a small number of side paraffin chains. Mass fraction of hydrocarbons is 75-85%, oxygen 2-8%, hydrogen 9-10%, nitrogen 0.1-0.5%, and sulphur 5-7%.

The maltenes are a mixture of oil and resins, and they are a dispersing agent. For the most part, the physical properties of bitumen depend on the dispersion degree of asphaltenes In maltenes.

It gradually softens as It is heated. Bitumen Is brown or black, waterproof, and is a good adhesive. Bitumen can be obtained in several ways, which depend on the economy of certain processes under the actual conditions.

In addition to vacuum residue, the raw materials for bitumen production can be asphalt produced by a deasphalting process, slurry oil, and extract produced by the solvent extraction process.

If asphalt, slurry oil, and extract are mixed with vacuum residue, which is obtained from a particular raw material, and then they are oxidized by air, various bitumen types are obtained.

Harder bitumen is produced by oxidation. The desired quality of hard bitumen cannot be produced from too soft raw material by oxidation. Bitumen types depend on the volatility of oil substances in bitumen.

A small amount of volatile oil substances makes bitumen harder and more brittle. Bitumen has multiple uses (road construction, isolation mate-rial), so it is very important for bitumen to have good adhesivity, i.e., to adhere very well to stone, metal, wood, paper, and other substrates.

Adhesivity depends on chemical content, viscosity, bitumen colloid state, and chemical and physical properties of the substrate. Thermal properties of bitumen, such as specific heat and thermal conductivity, are important in the manufacturing of insulating materials. 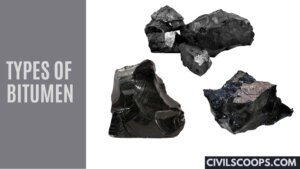 Here, the different types of bitumen are as follows.

Types of bitumen should be known in detail.

It is evident that softer road construction bitumen’s 100/150 and 160/200 have lower softening points, lower breaking points, and lower viscosity.

Road construction bitumen 160/220 is the only bitumen that can be produced without oxidation.

All the other road construction bitumen from 20/30 to 100/150 can be produced only by oxidation.

The most suitable crude oils for bitumen production are crude oils of naphthene and mixed base.

The application of bitumen in the industry is multiple and versatile. It is used because it is water-resistant, durable, and resistant to chemical reactions.

Types of industrial bitumen with their basic properties are shown below the table.

Types and properties of industrial bitumen

It is clear that industrial bitumens are hard (low penetration point), have high softening points, and have low breaking points, which are all good properties with respect to their application.

In the case of road construction and industrial bitumen, it is clear that the worst properties are: softening at higher temperatures and poor mechanical and elastic characteristics.

In order to improve the resistance to mechanical impact, increase cohesion, improve breaking resistance, and improve elasticity, it is necessary to add certain polymers to bitumen.

Polymers should not significantly improve the viscosity of the bitumen mixture. The chemical compatibility of bitumen and polymers has to be satisfactory so that the separation of phases does not happen.

The best and most used polymer is styrene-butadiene-styrene (SBS).

There are four methods of polymeric bitumen production:

The most often used method is a direct polymer and bitumen blend-ing inside the mixing tank.

In road construction bitumen, the requests for roads that are under heavy load are:

All these requirements are solved with polymeric bitumen. Polymeric bitumen can be produced in the refineries (fixed unit) or on building sites (mobile unit).

A fraction of styrene-butadiene-styrene polymer in polymeric road constructing bitumen is 3-15% w/w. The temperature of polymeric bitumen blending is 180-200 °C.

Too high temperature has a negative influence because the produced mixture can become brittle after the bitumen hardness and because of oxidation degradation of polymers. Polymer dispersion has a huge influence on thermal conditions.

Bitumen emulsion is the mixture of bitumen (50-70%), water, and 0.5% 1.0% emulsion agent, which is the most often a soap. Bitumen emulsions are used cold during the road construction and for industrial purposes.

Emulsions that are used for road construction are made from bitumen, which has penetration point 200-300. Emulsions have to be stable inside the storage and during transportation, and they also have to have defined viscosity in order to prevent bursting.

Bitumen with penetration point 40-50 is used for roof and floor insulations, while very hard bitumen with a very high softening point is used in the paper industry.

The unit of penetration is given as a decimillimeter (dmm). This is the unit that is measured in the penetration test. Notwithstanding, penetration grade bitumens are usually referred to without stating units.

It is summarised here as per the below table.

It refers to a number of European Standards that are relevant to the performance of paving grade bitumens.

The majority of penetration grade bitumens produced are used in road construction.

The tendency over the last decade of the twentieth century was to adopt harder bitumens that produce asphalts which have superior properties to those that are manufactured using the softer grades.

Oxidized bitumens are used almost entirely for industrial applications, e.g., roofing, flooring, mastics, pipe coatings, paints, etc. They are specified and designated by reference to both softening point and penetration tests, e.g., 85/40 is an oxidized grade bitumen with a softening point of 85 ± 50C and a penetration of 40 ± 5 dmm.

Oxidized bitumens also have to comply with solubility and loss on heating criteria. The specification requirements for the six oxidized grade bitumens specified in the UK, reproduced here as below table.

The softening points of oxidized grades of bitumen are much higher than those of the corresponding penetration grade bitumen and, therefore

Cutback bitumens are manufactured by blending either 70/100 pen or 160/220 pen bitumen with kerosene to comply with a viscosity specification. In the UK, cutback bitumens are specified and designated by the flow time (in seconds) through a standard tar viscometer

Three grades are available: 50 sec, 100 sec, and 200 sec. The majority of cutback bitumen is used in surface dressing but a significant amount is also used for the manufacture of both standard and deferred set asphalts.

In addition to STV tests and solubility, cutback bitumens have to comply with a distillation specification and a penetration requirement on the residual bitumen.

This ensures that during application and in service, the diluent will evaporate at a consistent and predictable rate and that the residual bitumen will have the appropriate properties in service.

The suffix on the SHELPHALT range of cutback bitumens indicates that they have been doped with a specially formulated heat-stable passive adhesion agent. This additive assists the wetting of the aggregate and resists stripping of the binder from the aggregate in the presence of water.

By Far Most Refined Bitumen Is Used in Paving Asphalt and Roofing Tiles, as Is a Large Amount of Natural Bitumen. However, Most of the Bitumen Extracted from Canada’s Oil Sands Is Upgraded into Synthetic Crude Oil and Sent to Refineries for Conversion into a Full Range of Petroleum Products, Including Gasoline.

Bituminous Paint Is a Type of Bituminous Coating Product That Provides Weatherproofing and Corrosion Resistance to the Elements. It Has Good Adhesive Properties. a Bituminous Coating Is Used to Build a Vapor-Proof and Protective Coat in Accordance with Its Formulation and Polymerization Grade.

Bitumen, Also Known as Asphalt, Is a Sticky, Black, and Highly Viscous Liquid or Semi-Solid Form of Petroleum. Thanks to Its Waterproofing Qualities, It Is Widely Used in Construction. Bituminous Membranes Are Perfect for Waterproofing Roofs, Basements, Below-Ground Structures, Bridges, and Other Structures.

Asphalt is a mixture of sand, aggregates, and bitumen. In asphalt, bitumen is used as a binder to hold together the asphalt, therefore asphalt is a concrete mixture, whereas bitumen is a binder or cement for pavements. It’s also common to have a pavement surface that has been sealed using bitumen only.

Bituminous paints are special paints used in construction for waterproofing, corrosion resistance, and damp proofing applications for different structural elements. It is made out of bitumen or coal tar dissolved in mineral spirit or naphtha, applied to structure either in liquid or semi-liquid form.

Here, the 7 different types of bitumen are as follows.

Viscosity grade bitumen in four different types including VG10, VG20, VG30 and VG40 is the most widely used bitumen in India, which has been replaced by bitumen penetration grade according to the Indian Standard (IS:73). This kind of bitumen is more reliable than others due to its advantages and properties.

Based upon the time taken by the water to evaporate, bitumen emulsion is further classified into 3 types based on setting time:

There are two main types of modified bitumen sheets: SBS and APP. APP. This stands for Atactic Polypropylene, and is a thermoplastic that is placed in the asphalt to reflect UV rays while protecting against colder temperatures.

Most bitumens are colloidal in nature.

Asphalt bitumen is a binding organic material made from the by-products of refined crude oil. It is used in road construction because it is easy to produce, reusable, non-toxic, and a strong binder.