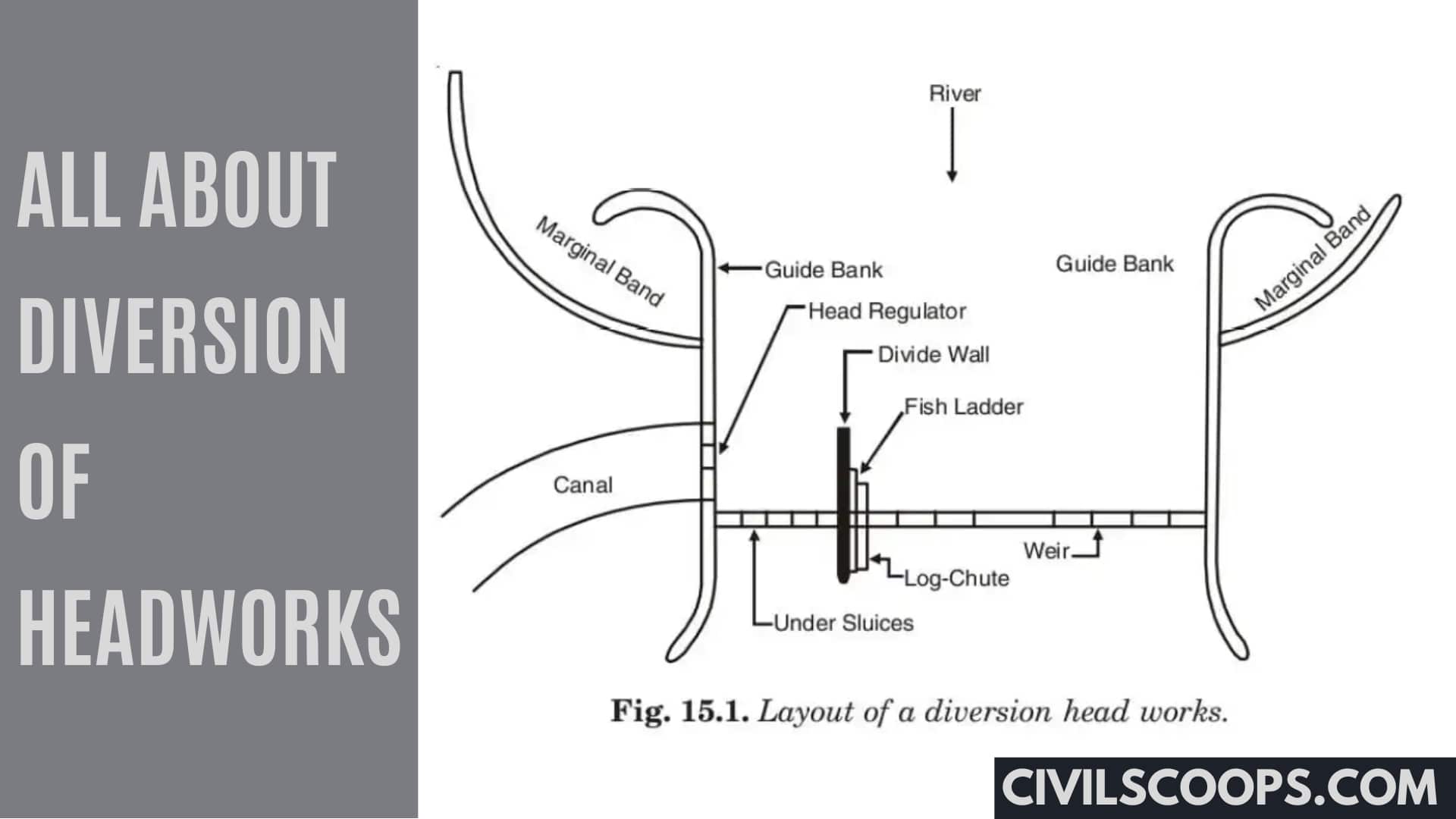 What Is Diversion of Headworks (Rivers)? 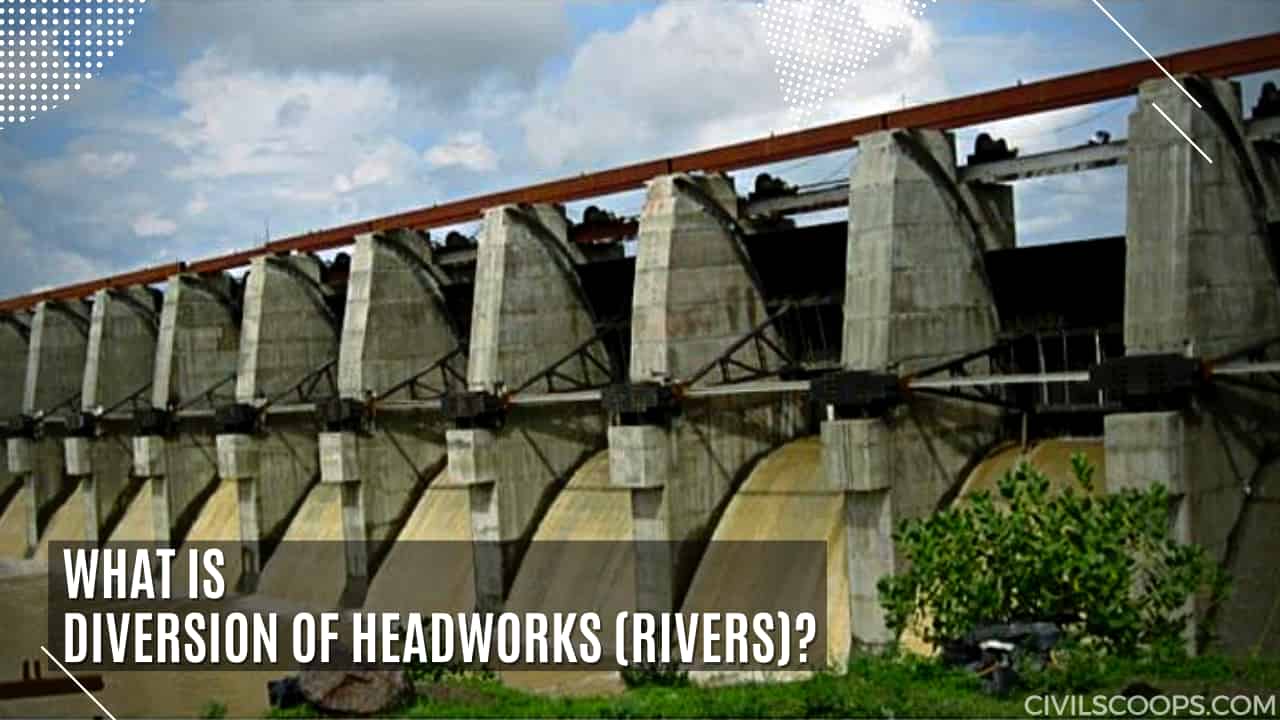 For direct irrigation from the river, a structure constructed across a river to raise the water level is known as diversion headwork. It divers the required supply into the offtaking canal of the river.

Here, the list for putpoes of diversion headworks are as follows. 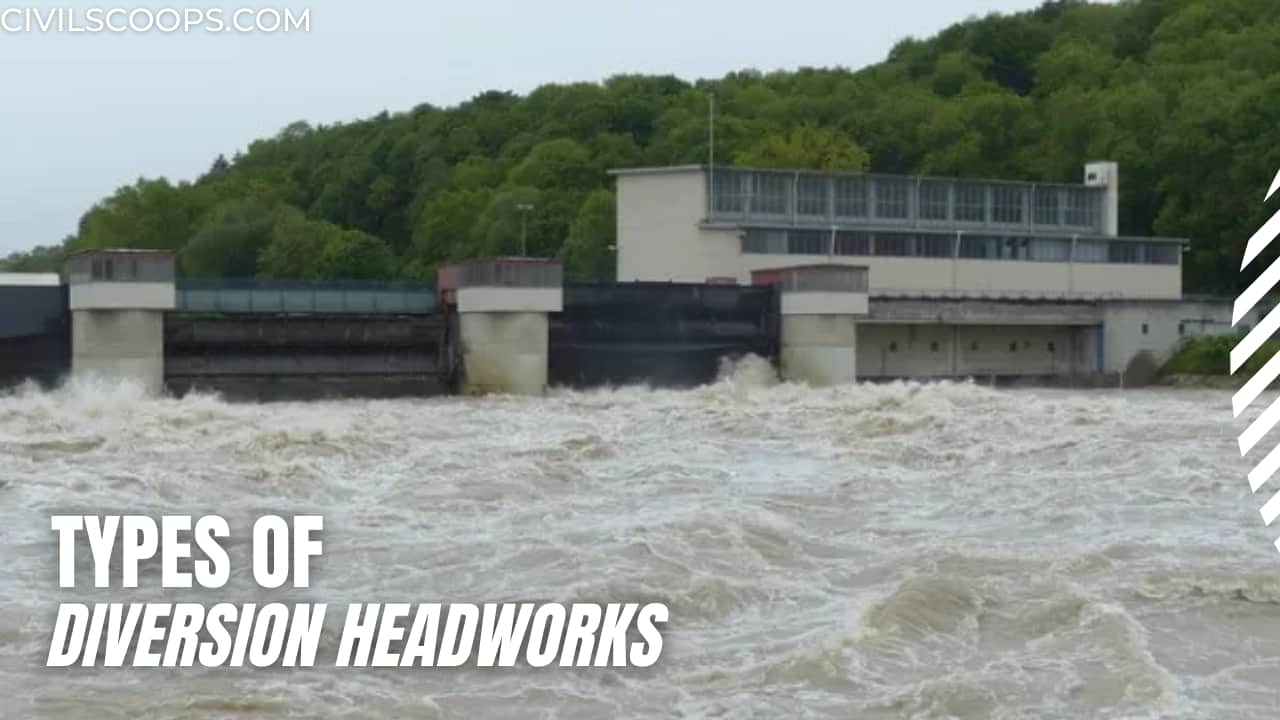 A diversion headworks can further be subdivided into two principal types.

To stop the flow of the river, a spur or bund of temporary nature is constructed across the river. Due to spur or bund, water level increases in the river.

It can be diverted to the command area. This type of construction is not able to pass the flood safely. So it can be damaged during the food.

Temporary spurs or bunds are constructed every year after the floods.

Permanent diversion headworks consist of a permanent structure such as a weir or barrage constructed across the river to raise the water level in the river and divert it into the canal. 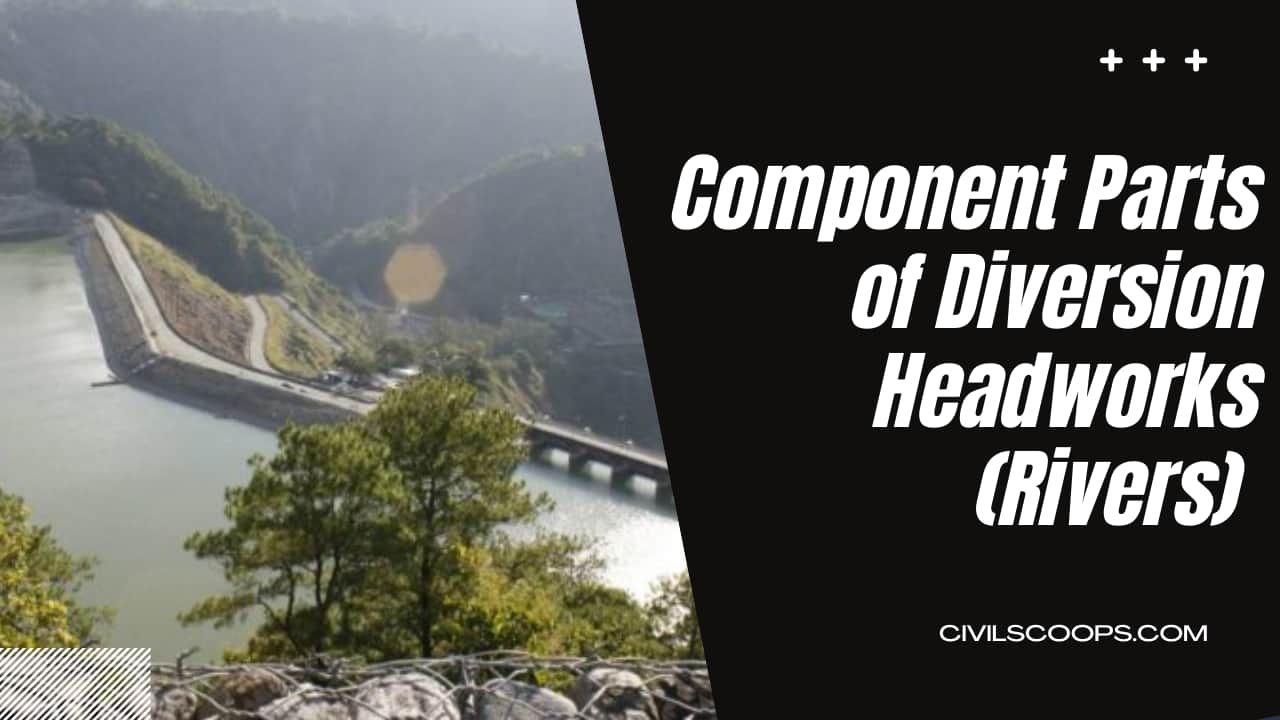 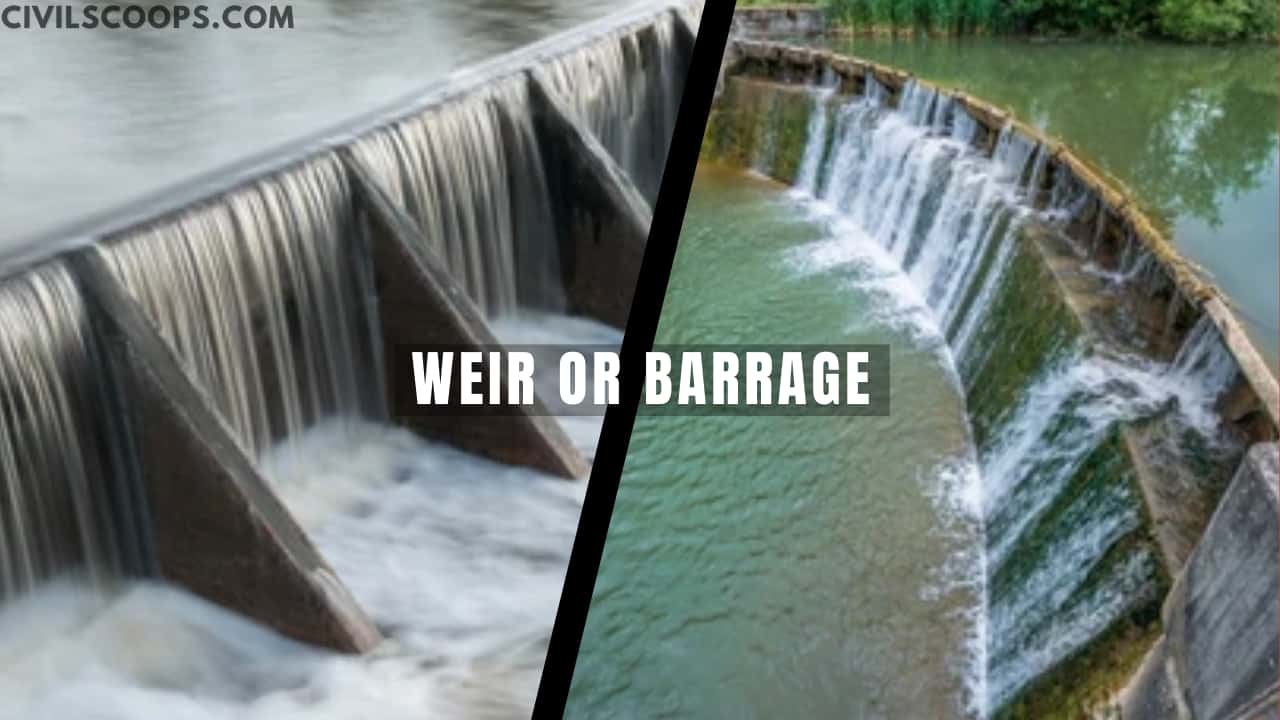 For important works, weirs or barrages are constructed. At permanent diversion headworks, a canal head regulator is also constructed. Let us discuss weirs and barrages in detail. 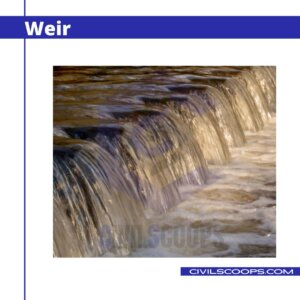 A weir is a solid obstruction constructed of masonry or concrete across the river to raise its offtaking canal. If a weir stores water for tiding over small periods of short supplies, it is called a storage weir. The difference in storage weir and dam is in the following points.

Darn stores water for a comparatively longer duration and is mostly higher than the weir. 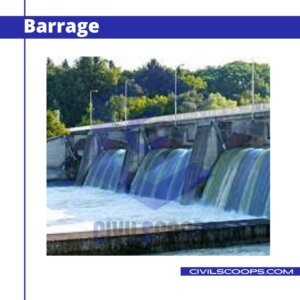 A barrage is also another type of diversion headwork; in the barrage heading up of water is effect by the operation of gates.

No solid obstruction is put across the river. The crest level of the barrage is kept at a low level, mostly at the river bed level.

The crest level of the barrage should be kept at a low level. During floods, gates are opened to lower the high flood level. 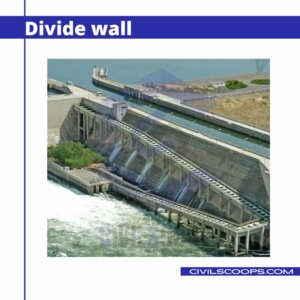 A divide wail may be of solid masonry or a grove. The groin is an embankment protected on all sides by stories or blocks. It is built at right angles to the axis of the weir separating the weir and the under sluices.

The divider wall extends upstream to a little beyond the beginning of the head regulator and downstream to the launching apron of under sluice portion.

The divider wall is normally constructed of solid masonry. It is constructed on a good foundation taking the walls below the deepest possible scour. 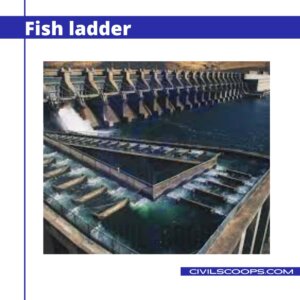 Large rivers are generally inhibited by several types of fish, many of which are migratory such fish has found to be moving from u/s hill to d/s at the beginning of winter season in search of warmer water and return to their spawning ground u/s, slightly before the monsoon in May and June.

If no arrangement is made in weir or a dam to enable their migration, their life goes into danger. So, for an easy moment of the fish from u/s to d/s and again from d/s to u/s fish ladder is constructed. The typical plan of the fish ladder is shown above figure. 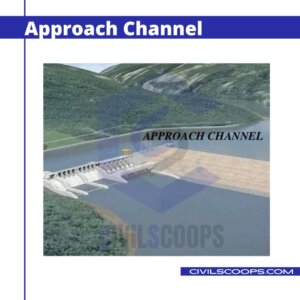 The velocity of the river water should be reduced when it reaches the canal head regulator; when the velocity reduces, the silt particles which are in suspension will settle down & clean water may enter the canal.

To reduce the entry of silt into the canal, the floor level of the upstream side is so adjusted that a pocket is made in front of the canal head regulator.

In this pocket, the silt settles down, and the canal draws water from the still pond of the pocket. This pocket is known as an approach channel, which is made with the help of a divider wall.

7. Under Sluices or Scouring Sluices 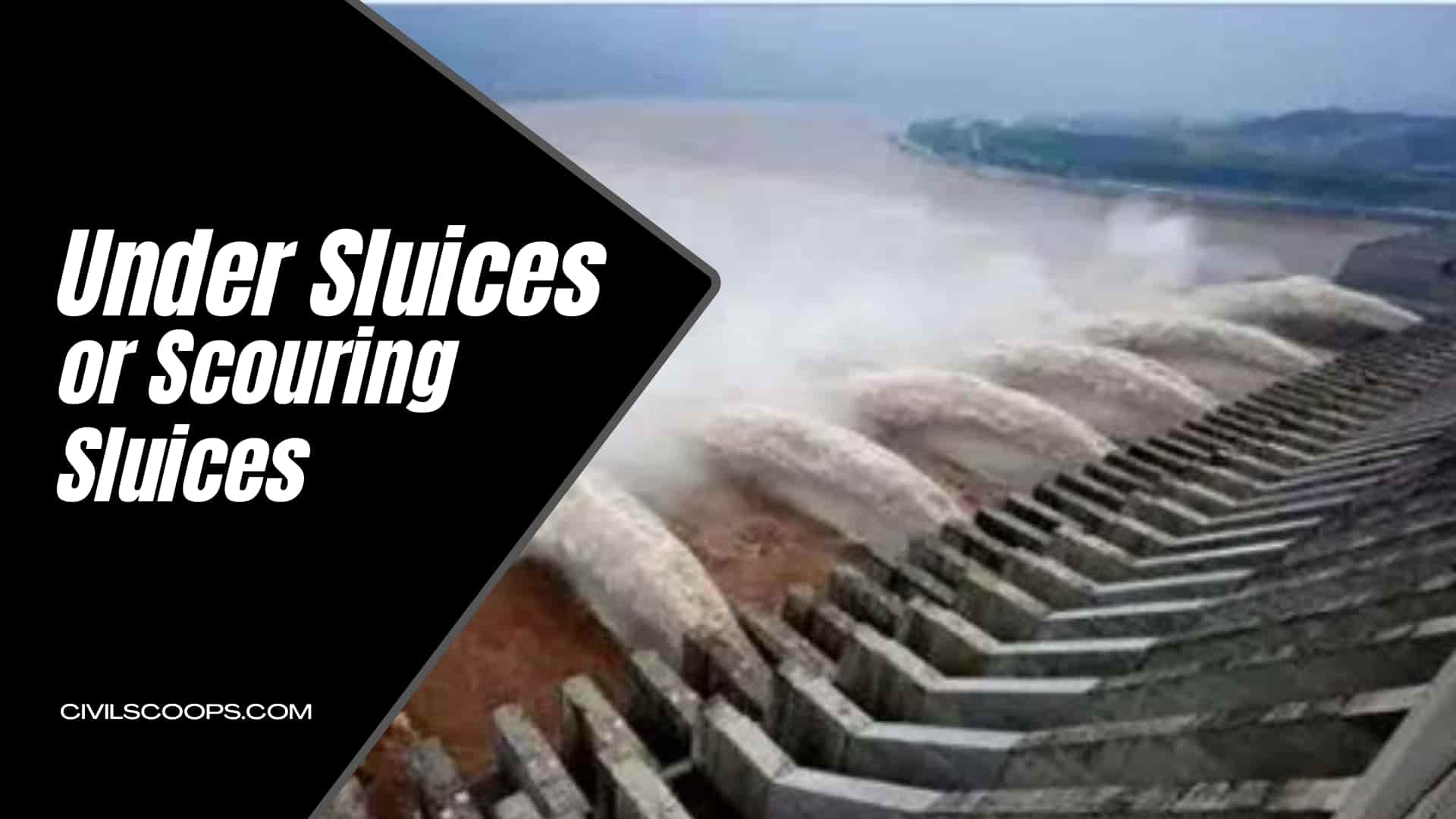 These are the opening made in the wair structure. The under sluices or scouring sluices make a deep channel in front of the head regulator.

They discharge a part of the flood on the d/s side of the under sluices and should be kept lower than that of the crest of the head regulator by at least 1 to 1.2 meters.

Piers are constructed at regular intervals between the piers gates are provided. The flow of water is controlled by the approach channel of the weir and is discharged to the downstream side by opening the gates.

Due to this reason, they are also known as scouring sluices. While designing the capacity of under sluice, the following points should be considered. 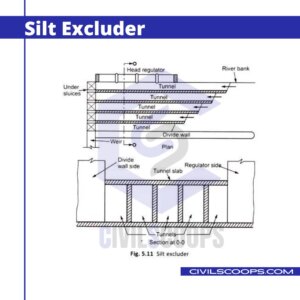 A silt excluder is a structure constructed in the bed of a river, u/s of a head regulator to attack the river bed water and divert the same into the d/s of the river.

Its main function is to prevent the entry of silt into the canal. A typical silt excluder is shown in the figure. 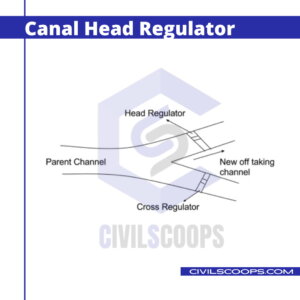 A concrete cutoff at the end of the impervious floor should be provided. The hydraulic jump calculations over the sloping glacis are done in the same way as the sloping weir glacis.

It regulates the flow in the off-taking canal. Silt entrance into the canal is controlled. It raises the level of water in the river. This causes diversion of the river water into the off taking canal, under gravity flow.

They move from one part of the river to another according to the season. In our country generally fish move from upstream to downstream in the beginning of winter in search of warmth and return upstream before monsoon for clearer water.