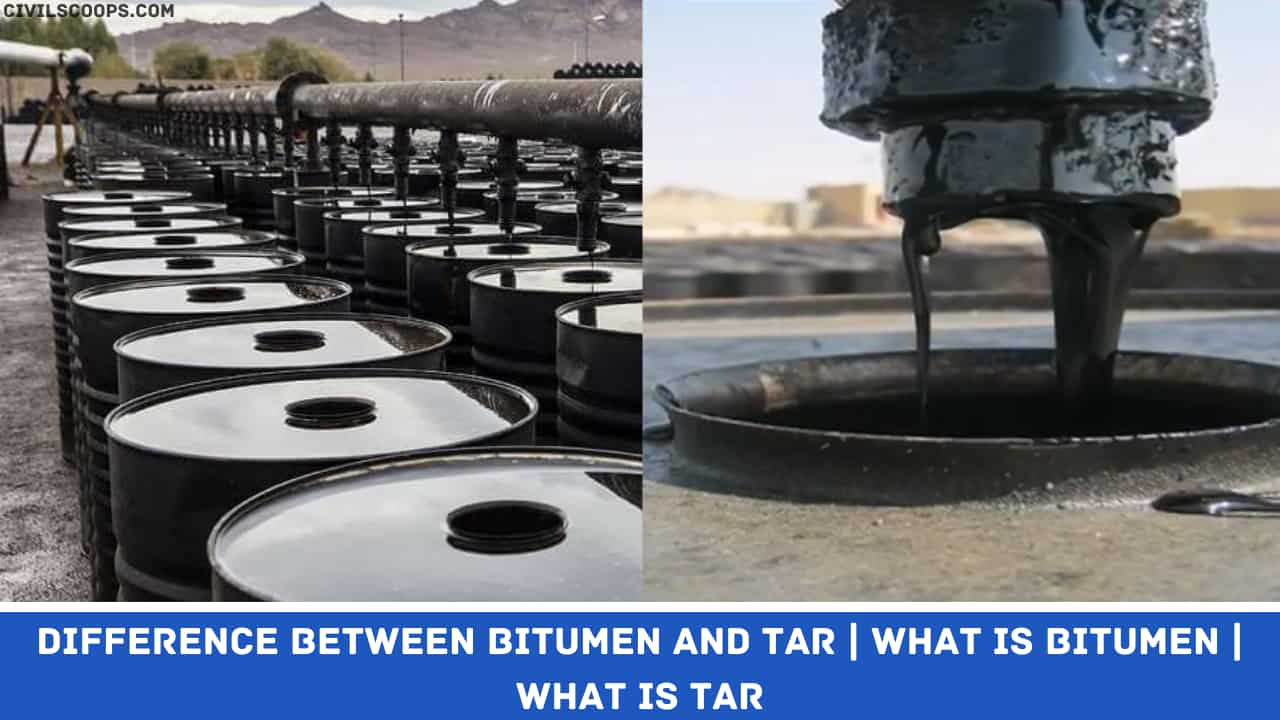 The bitumen is the binding material that is present in asphalt. It also sometimes called mineral tar. It is obtained by partial distillation of crude petroleum.

It is chemically a hydro-carbon. It is insoluble in water, but it completely dissolves in carbon disulfide chloroform, alkalies, alkaline, carbonates, petroleum spirit, and oil of turpentine.

It is found on analysis is composed of 87 percent carbon 11 percent and 2 percent oxygen by weight.

The bitumen is back or brown in colour, and it is obtained is solid or semi-solid or sate. Its applications are the same as the residual asphalt. 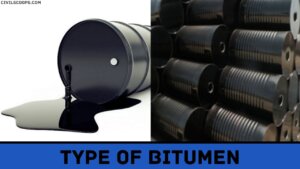 Following are the types of Bitumen

Soft bitumen can be modified by heating until it becomes a liquid and then passing air under pressure by which all the volatile compounds in it can be driven out. The product is called blown bitumen.

Bitumen combined with other petroleum distillates forms cutback bitumen. This may be regarded as a means of applying penetration-grade bitumen at lower temperatures.

When bitumen distilled to a definite viscosity of penetration, which does not require further treatment like heating.

The basic form of bitumen and has to be heated before application.

A product in liquid form, formed in aqueous medium and stabilizing agents. This also another means to obtain bitumen into a liquid form so that it can be easily applied at ambient temperature.

It consists of bitumen thinner and suitable filler made into a plastic Conn. As it is plastic, it can be used for filling cracks in masonry, stopping leakages, etc.

Here, the different types use of bitumen are as follows.

Tar is a viscous black liquid made of hydrocarbons that can form in multiple ways. Because of this, the chemical composition of tar varies, though it is always made of organic matter of some sort.

It has many uses as a waterproofing and sealing agent. It is also used for many medicinal purposes.

Lis of Different types of tar ara as follows.

A heavy, back, and strong-smelling liquid is known as coal tar. In closed iron vessels, the variety of tar is prepared by heating the coal.

The escaping gases are allowed to pass through the tube, which is kept cool by the circulation of water. The coal tax gets deposited in these tubes.

It is usually derived as a byproduct during the manufacture of coal gas. The coal tar is used for making macadam roads, preserving timber, etc.

Distillation of pipes and resinous wood gives wood tar. In contains, creosote oil which can be obtained by further distillation of wood and hence is possessed stronger preservation property.

However, the wood creosote is not so good as coal tar creosote for the preservation of timber.

Here, the different types use of tar are as follows.

The two substances are very similar and sometimes the terms tar and bitumen are used interchangeably. Bitumen can be naturally occurring whereas tar usually has to be artificially distilled. Also, Bitumen occurs in both solid and liquid forms whereas tar is generally always a viscous liquid.

Difference Between Coal Tar and Bitumen

Asphalt is a mixture of sand, aggregates, and bitumen. In asphalt, bitumen is used as a binder to hold together the asphalt, therefore asphalt is a concrete mixture whereas bitumen is binder or cement for pavements. It’s also common to have a pavement surface that has been sealed using bitumen only.

Modified bitumen is thought of as the evolutionary cousin of the built-up roofing systems (BUR) that have been used on low-slope roofs for more than 100 years. It is made of asphalt combined with polymerized rubber or plastic, then reinforced with fiberglass to create a rugged-yet-flexible waterproof membrane.

APP-modified bitumen is a roofing membrane. Contractors typically apply these membranes to asphalt with a torch. The process looks a little similar to mopping, as the contractor must spread the membrane across all sections of the roof. Once applied, you can choose to leave the roof’s surface smooth or add granules.