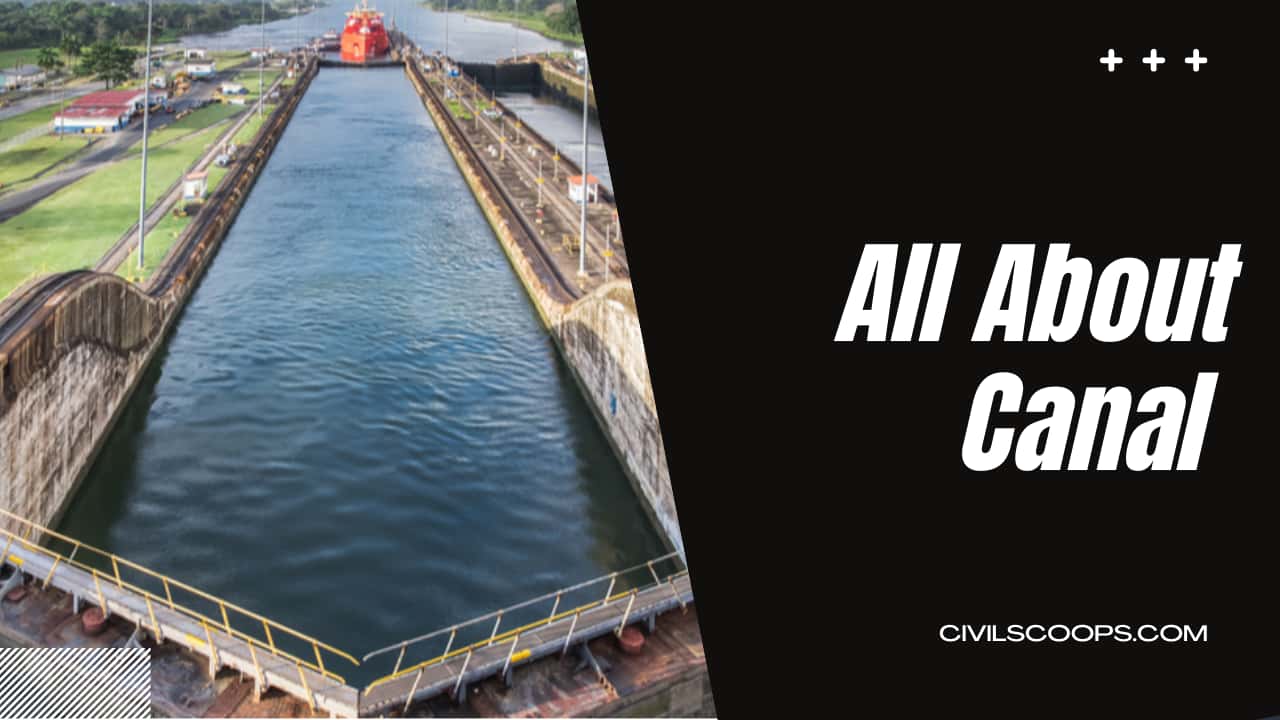 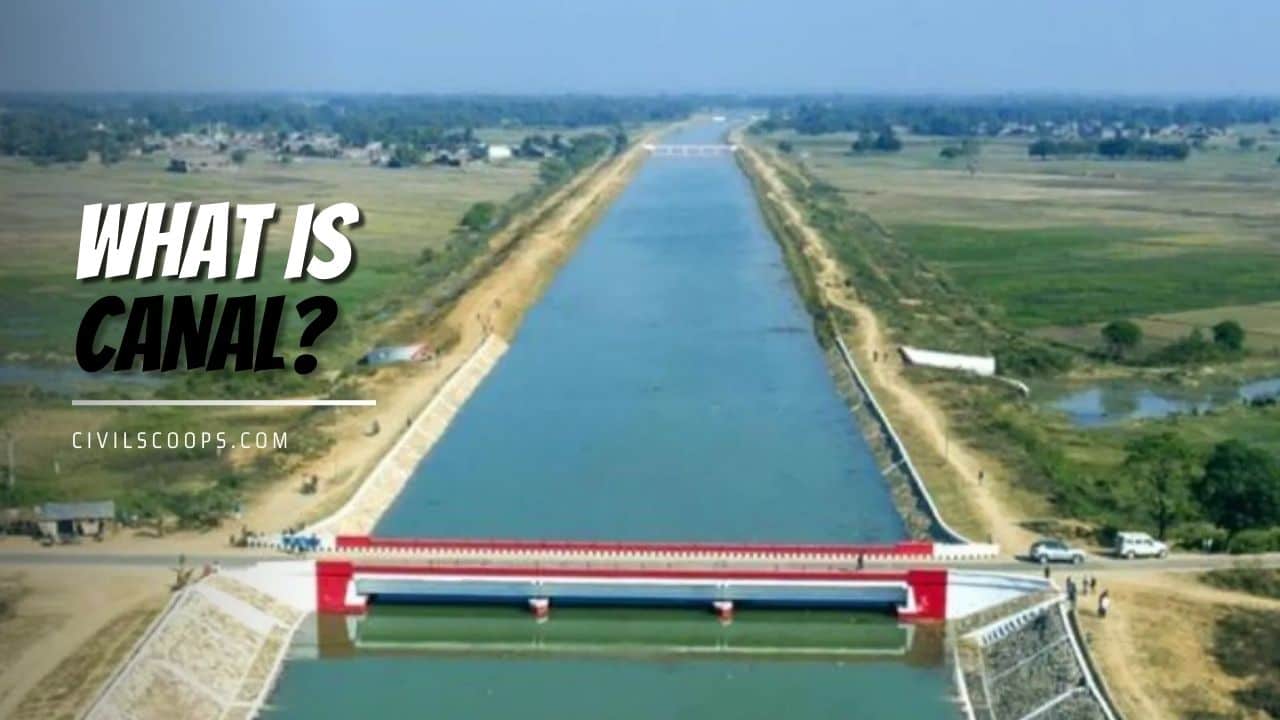 The irrigation water is conveyed from the reservoir to flow through an open channel of a trapezoidal shape which is known as a canal. The canal is a man-made waterway that allows ships and ships and boats to pass from one place to another place.

Canals are widely used for the transportation of water for irrigation purposes, and for different human uses. In the olden days, the canal is used to connect the waterfalls. 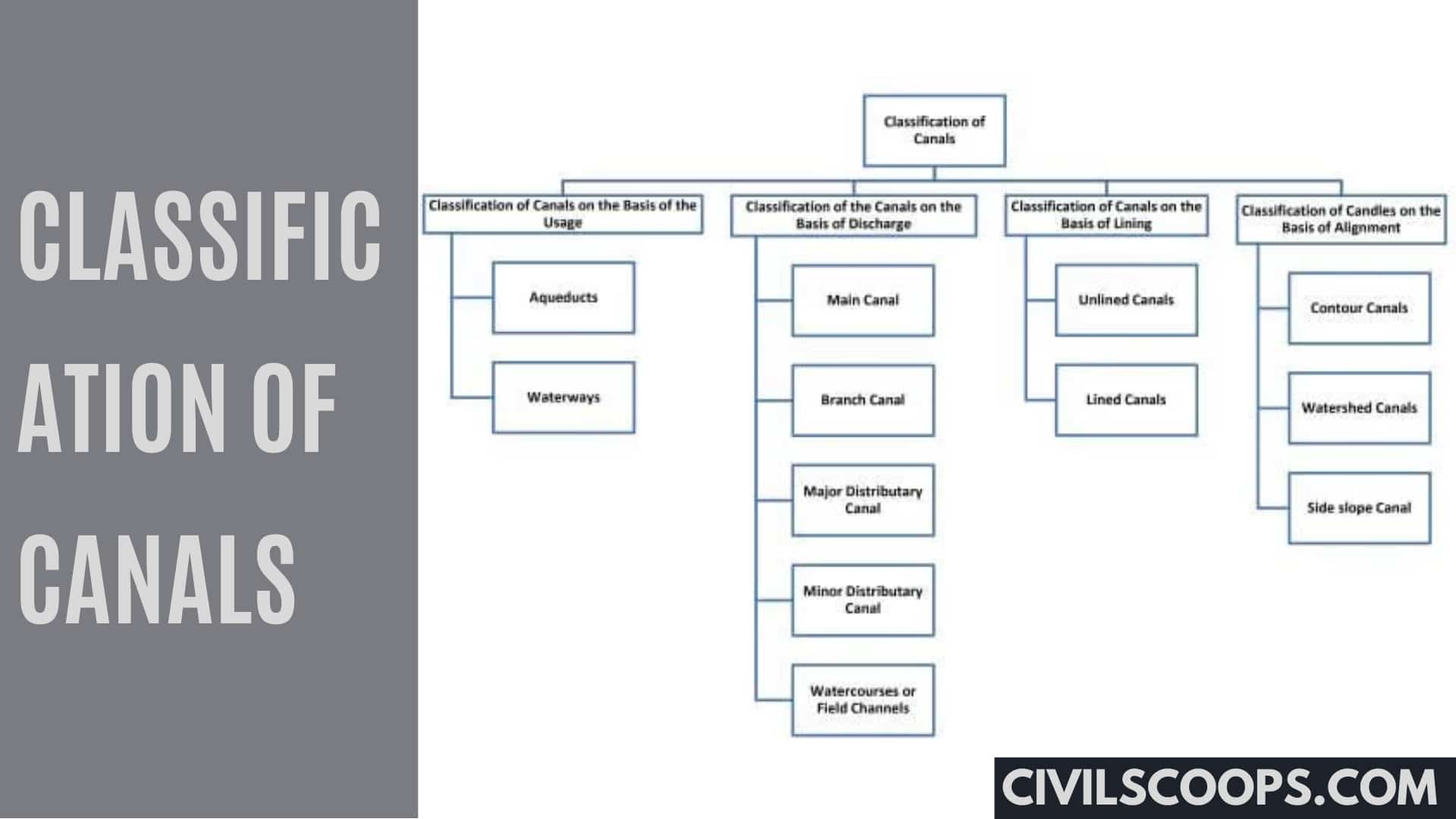 The canals are classified into different types on the basis of the factor given as follows.

1. Classification of Canals on the Basis of the Usage

Here, the details knowledge of all canals as per basis of usage are as follows.

The Modern types of aqueducts use the pipeline as their path. These types of canals are used for the conveyance and delivery of water for consumption and other agricultural as well as irrigation purposes.

Waterways are the type of canals that are used for carrying ships, boats, and people from one place to another. The path of waterways is known as the secondary by-product of our country’s extensive historical watermark network. It plays a vital role in Transportation.

This includes the different features like rivers, streams, canals, lakes, reservoirs, and docks. Waterways help to provide a safe operating environment by reflecting on the local environment. Waterways also help to decrease carbon footprints and reduce Road congestion and improve the health of the local community.

2. Classification of the Canals on the Basis of Discharge

Here, the details knowledge of all canals as per basis of discharge are as follows.

The Main Canal carries discharge directly from the river. It takes off directly from the upstream side of the weir head works. The main Canal supplies the water to the branch canal. The Main canal cannot be used for direct Irrigation.

The Main canal helps to supply the water from a river, reservoir, or canal to the irrigated land by the flow of gravity.

When the main Canal reaches the area where the irrigation is to be done, it divides out into two branches that join the different parts of the area. The Branch canal ends in a Distributary. The branch canals have a discharge that ranges from 5 to 10 cumecs.

Branch Canal also plays the role of the feeder channel for the major and minor distributaries. Branch channels do not carry direct irrigation but provide direct outlets.

The discharge in the minor Distributary is less than in the major distributary. They also help to provide the courses through the outlets provided along with them.

The Discharge in the watercourses is less than 25 cumecs. A filed channel takes off from a significant distributary or minor, and it depends upon the extent to which the irrigation will happen.

From the channels, water enters the field of cultivators. Watercourses field channels may be constructed by the government on behalf of the cultivators only. These are small channels which are known as Field channels, generally have a capacity of fewer than 05 cumecs.

The death of the watercourse or field channels is usually less than 1 km having a command of 10 to 15 hectares.

3. Classification of Canals on the Basis of Lining

Here, the details knowledge of all canals as per basis of lining are as follows.

Unlined Canal consists of beds and banks which are made up of natural soil. The underlined canals are not provided with the lining of impervious material. It reduces the growth of Aquatic weeds, which retards the flow and leads to an increase in the maintenance cost.

Unlined canals can tolerate velocity not more than 0.7 m/s because of erosion. In the case of unlined canals, there may be a danger of the breakage of the bank of the canal, which is caused by the overtopping erosion and animal burrowing.

4. Classification of Candles on the Basis of Alignment

Here, the details knowledge of all canals as per basis of alignment are as follows.

The control Canal is an artificial canal that is known for being dug and Navigable by following the control line of the land. In this alignment, the canal generally follows a country except for the necessary longitudinal slope. Main Canal is run as a control Canal in the header reach. It can irrigate on one side only, which is the lower side.

In the control Canal, one of its sides is high, so a bank is required only on the other side. There may be a risk of breaching or silting. The control canal need not follow the same contour. To enable the water to flow by gravity, some surface slope should be given.

The drawback of the contour alignment is that it irrigates on one side only. Control panels are most suitable in hilly areas.

The watershed canal aligns with any type of natural water shade or ridgeline. It is also known as the ridge canal. This type of canal usually takes off from the contour canal. It irrigates on both sides. The rich channel is more economical.

In this alignment, the canal is aligned across the contours. There is not any types of cross drainage works required. These candles have steep bed slopes, and hence linings are necessary to prevent erosion.

What Is an Inundation Canal? 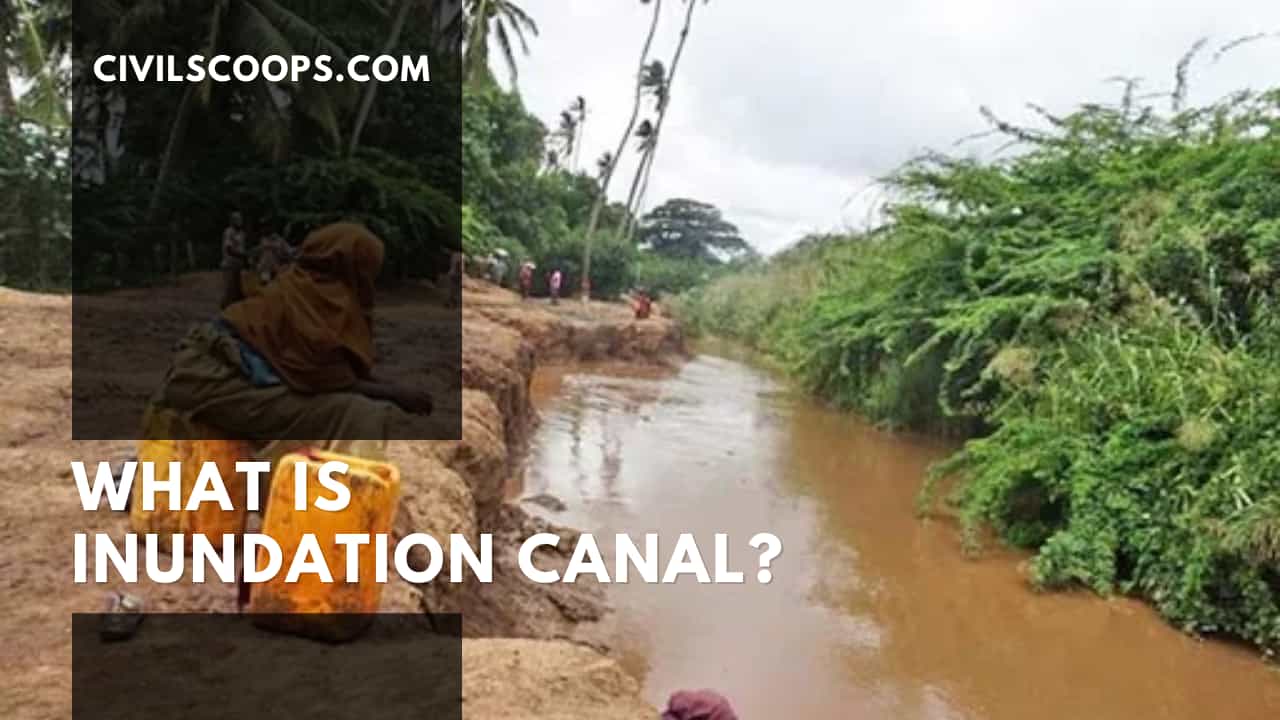 What Is Perennial Canal? 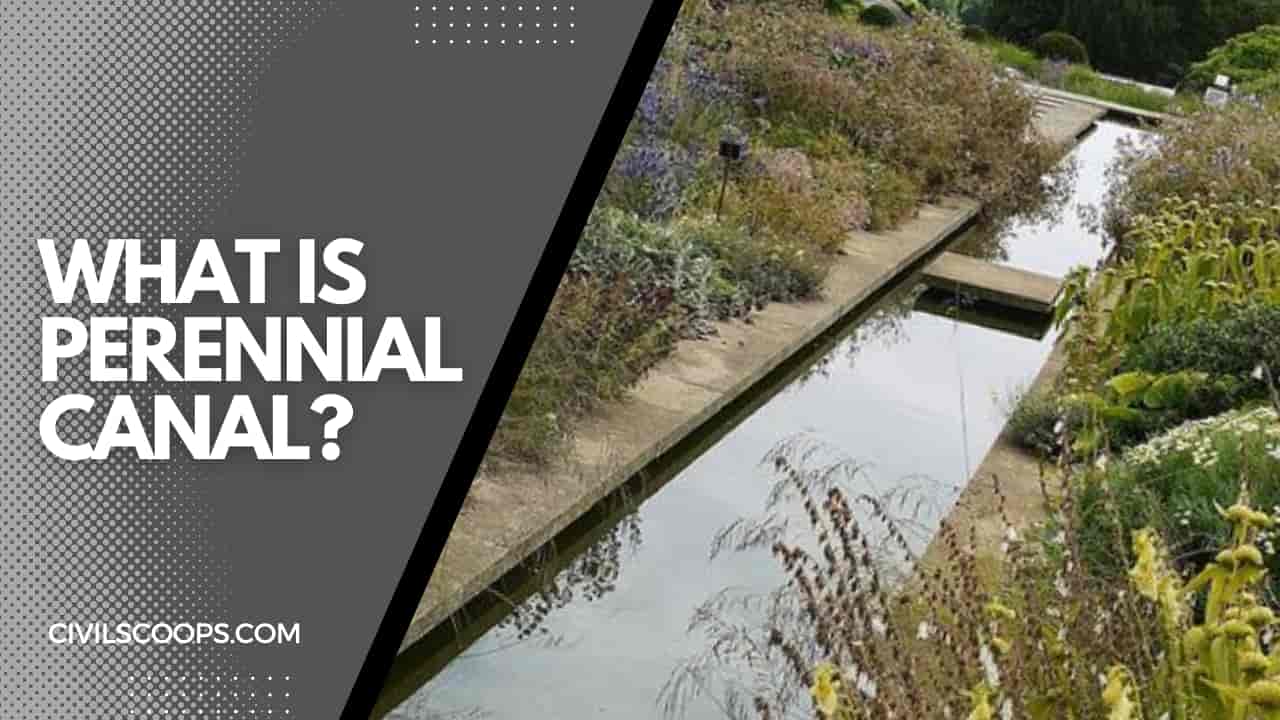 This canal flow throughout the year. That’s why it is known as perennial canals. The perennial canal is linked to the dams and provides water for the irrigation of a larger area of land.

What Is Canal Irrigation? 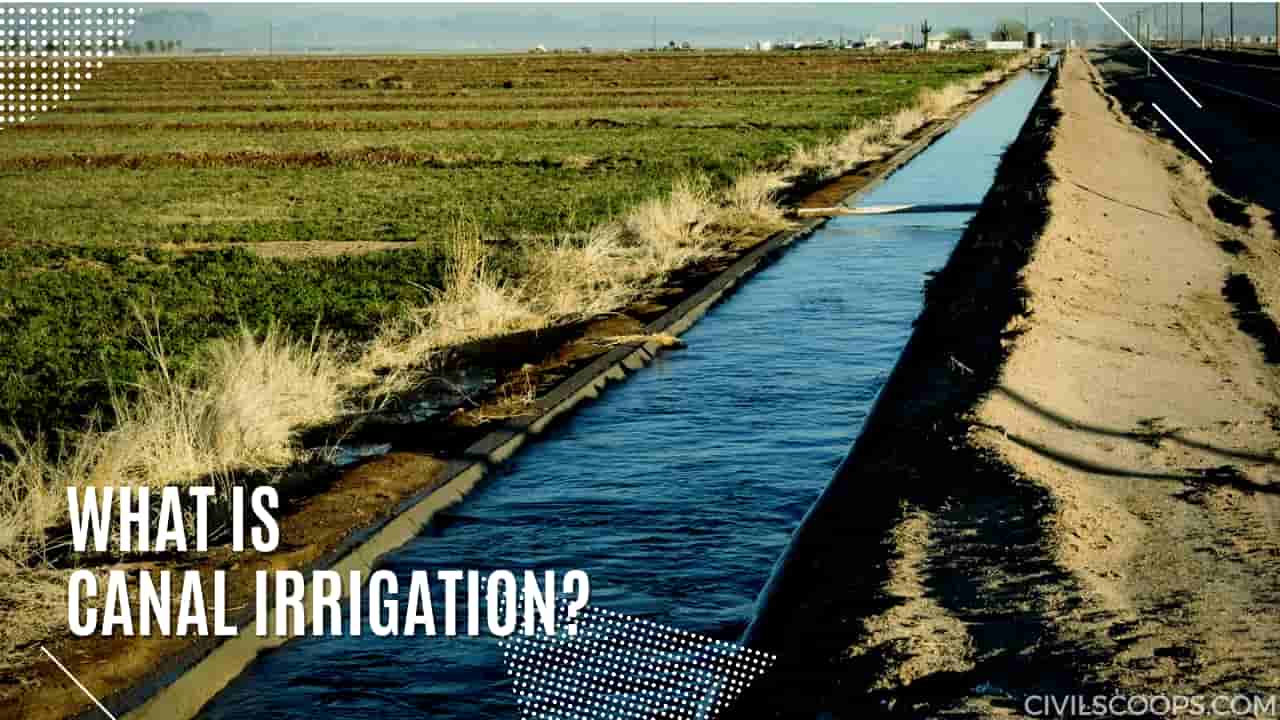 An irrigation canal or lateral is constructed to convey water from the source of supply to one or more farms. The purpose of this practice is to deliver water to the farm irrigation system (s).

There are many advantages of Canal irrigation which are given below

The disadvantages of Canal irrigation are as follows

A canal is a manmade waterway that allows boats and ships to pass from one body of water to another. Canals are also used to transport water for irrigation and other human uses.

Canals waterways are waterways or engineered channels built for drainage management or for conveyancing water transport vehicles. They carry free, calm surface flow under atmospheric pressure, and can be thought of as artificial rivers.

Irrigation canals are the main waterways that bring irrigation water from a water source to the areas to be irrigated. They can be lined with concrete, brick, stone, or a flexible membrane to prevent seepage and erosion.

Inundation canals are the canals that are linked to large Rivers. Such canals use the excess water of rivers at the time of floods and remain operational during the rainy season. This type of canal is usually used for irrigation.

Perennial Canals flow throughout the year and are thus referred to as perennial canals. They draw water from perennial rivers or from artificial reservoirs, which sustain a high water level on the upstream side. During the dry months, such canals are not beneficial.

A canal aligned along the ridgeline or watershed line of an area is said to be ridge canal or watershed canal. Since it is running at the peak altitude of the area, irrigation on both sides of the canal up to a larger extent of the area is possible.

The canal which is aligned along any natural watershed (ridge line) is called a watershed canal or. a ridge canal. Aligning a canal (main canal or branch canal, or distributary) on the ridge ensures gravity irrigation on both sides of the canal.

Canal alignment may be contour canal, side slope canal, or ridge canal as per the terrain of the command area. A contour canal irrigates only one side of the canal and crosses a number of valleys. Thus, it involves different types of cross-drainage works like aqueducts, under tunnels, super passages, etc.

A canal serves to conduct water to a larger canal.