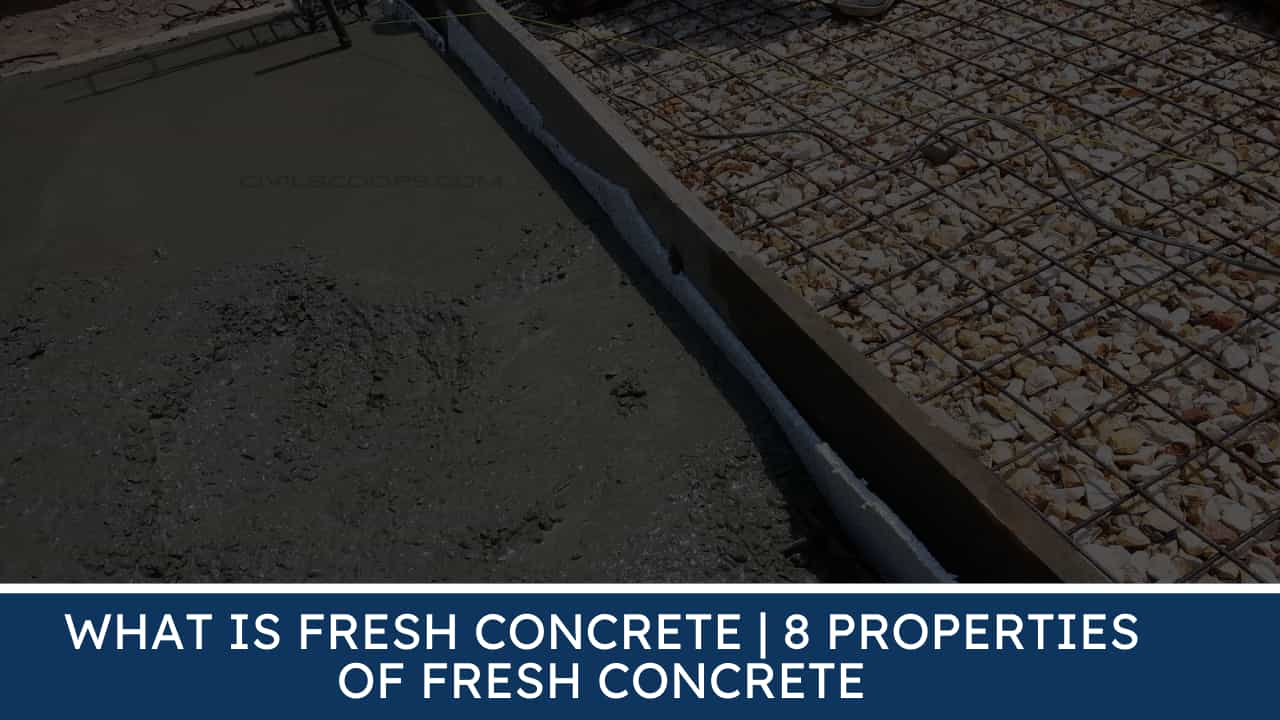 What Is Fresh Concrete?

When concrete is its plastic state, it is known as fresh concrete. Fresh concrete can be easily molded to a durable structural member. It can be prepared on the spot and may give a wide range of properties from easily available raw materials. 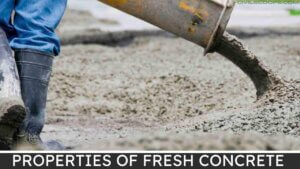 To as workability. The workability of fresh concrete is thus a composite property. It is difficult to define precisely all the aspects of the workability in a single definition.

IS 6461 (Part-VII)-1973 defines workability as that Property of freshly mixed mortar or concrete that determines the ease and homogeneity by which it could be mixed, placed, compacted, and completed.

Test of Workability for Fresh Concrete

Concrete is not recommended to be placed at a temperature above 40°C without proper precautions, as laid down in IS:7861(part -1).

Special problems are encountered in the preparation, placement, and curing of concrete in hot weather. The First 24 to 72 hours after placing fresh concrete are of extreme importance.

In this period, hydration of concrete occurs, which is a chemical process in which concrete gains its strength.

If the temperature of concrete is not controlled and it goes beyond maximum range during hydration, then stresses are produced, and cracks are formed in concrete.

Also if the temperature falls below the minimum temperature, then concrete takes a large time to set, and the hydration process slows down.

It is necessary to understand here that concrete can be done at any temperature unless the temperature is controlled.

It is the ratio of cement and water utilized in the preparation of concrete. The quantity of water used at mixing concrete is very important.

If the percentage of water used is less, then there will not be a sufficient quantity of water to hydrate cement. It will result in weak and porous concrete.

Therefore, the usual tendency is to use too much water that gives a more workable mix, but it doesn’t give sound concrete. Too much water results in the segregation of aggregates and gives porous concrete of low strength and low density.

A certain minimum proportion of water is necessary to hydrate the cement completely. To create the concrete sufficiently workable to be placed in position, some more water is needed.

So long as the concrete is sufficiently workable, for the way of placing used, its strength depends on the proportion of water to the cement in the mix.

The water-cement ratio shouldn’t be allowed to exceed the specified limits for various types of concrete and should usually be kept as low as the methods of placing will allow.

Abrahms, as a result of a large number of experiments, states that“with given materials and conditions of the test, the ratio of the quantity of mixing water into the quantity of cement alone determines the potency of concrete as long as the mix is of workable plasticity.“

Segregation is usually caused by excessive vibration of cement. The different materials that make up the concrete mix have different weights, so while the concrete is in a liquid state, there is a tendency for heavier materials to settle to the bottom, and the lighter slurry to rise to the top.

Isolation means the separation of newly designed solid ingredients from each other in a non-uniform mixture.

More specifically, it implies the separation of coarse aggregates from the mortar in which they are composed due to differences in the size, density, shape, and other properties of the material.

Due to the separation, the hive is made into concrete, and it basically affects the strength of the concrete and its porosity.

During concrete work, isolation in concrete can occur on-site, and this affects the durability of your structures. In fine concrete, all the ingredients are properly distributed and form a homogeneous mixture.

If a concrete sample exhibits a tendency to separate coarse aggregates from the rest of the material, it indicates the separation in the concrete.

Harmful Effects Due to the Segregation of Concrete

Bleeding in concrete is sometimes referred to as water gain. This is a special form of separation, in which some water from the concrete flows to the surface of the concrete, with the lowest specific gravity among all concrete components.

Excessive bleeding is seen in thin members such as roof slabs or road slabs, and when the concrete is placed in sunny weather.

Prevention of bleeding in concrete

If water is removed from the concrete before it sets, the volume of the concrete is reduced by the amount of water removed. This volume reduction is known as plastic shrinkage.

This is the shrinkage that the fresh concrete undergoes until it sets completely.

Water may be removed from the plastic concrete by evaporation or by being absorbed by dry surfaces such as soil or old concrete or by the dry wooden formwork.

When concrete changes its state from fresh to hardened then this process is called setting. And the time required to complete this process is known as Setting Time of Concrete.

Setting time depends on the type of cement and it can be increase or decrease by adding admixture in concrete.

When cement comes in contact with water, a chemical reaction begins. This reaction is known as hydration.

If the mixing water dries out too rapidly before the cement has fully hydrated, the curing process will stop, and the concrete will not harden to its intended strength.

The concrete slump test measures the consistency of fresh concrete before it sets. It is performed to check the workability of freshly made concrete, and therefore the ease with which concrete flows. It can also be used as an indicator of an improperly mixed batch.