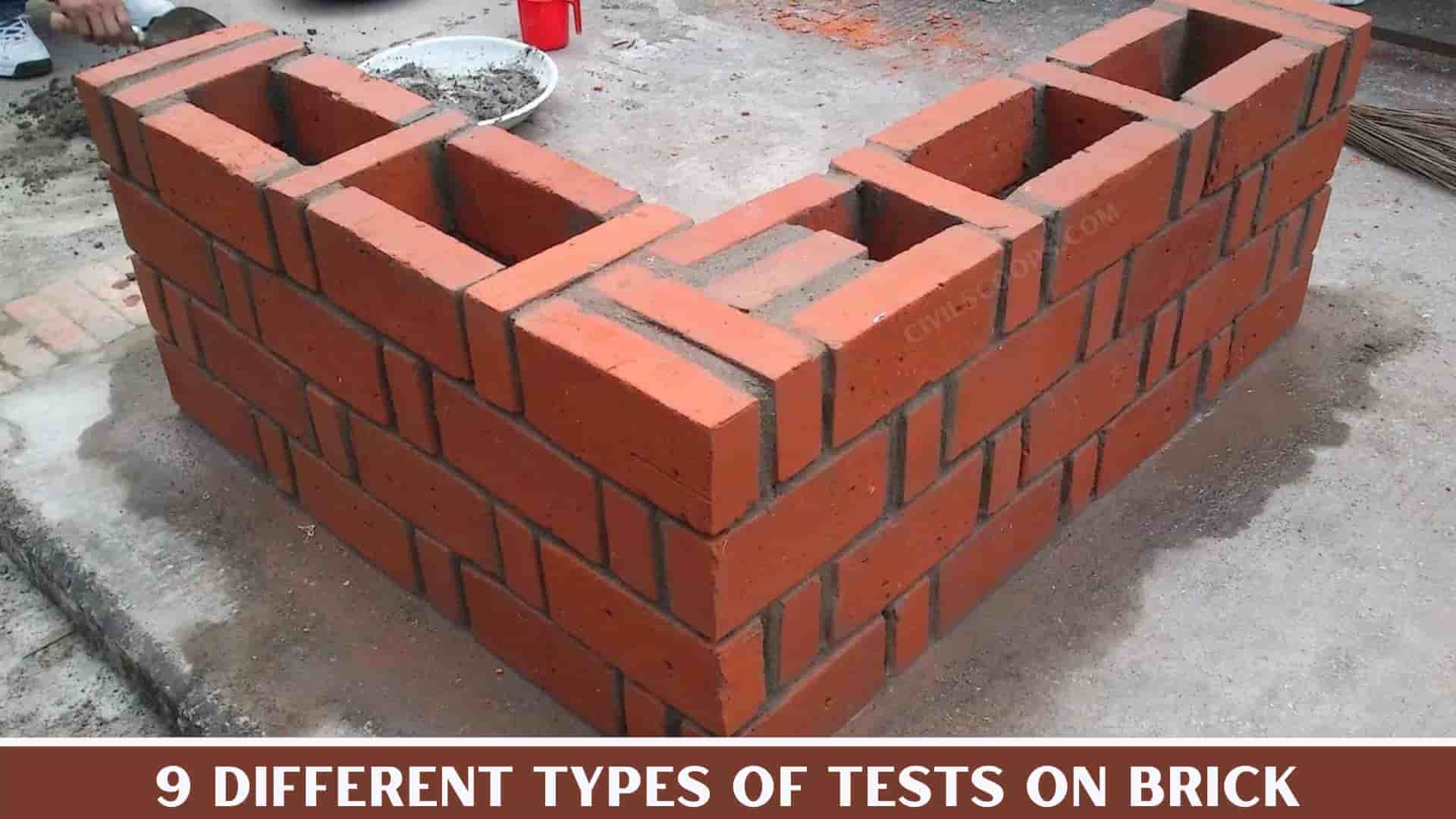 Introduction for Tests on Brick

Bricks should be checked and tested on-site before using them for construction purposes. It is very necessary that the bricks should pass all the required criteria given by the Indian Standards.

Bricks are artificially constructed with the help of clay. It is very important that bricks should go through various tests to know their suitability for construction work. There are basically two types of tests conducted on the bricks, which are laboratory tests and field Tests.

Field Tests also play an important role which is very helpful in checking the brick’s quality present on the site. The one best part of the field test on the bricks is that it gives faster results.

Here, two different parts divided the brick test. One part is a lab test on bricks, and the second part considers a field test on bricks.

All types of tests on a brick in full detail and specification are as follows. 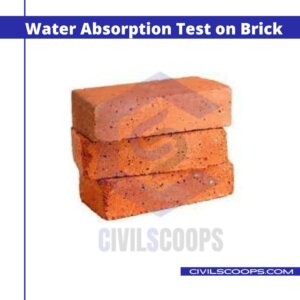 Let its weight be W. The bricks are soaked in water for 24 hours at room temperature and then weighed. Let its Weight be W1

As per Indian standards, the amount of water that is absorbed by the bricks should not be more than 20% of their Dry weight.

As per IS: 1077 and 1237, the water absorption for various grades of bricks is as follows.

Class 1 Brick: The water absorption for class 1 brick should not be more than 20% of its Dry weight.

Class 2 Brick: The water absorption for class 2 brick should not be greater than 22% of its Dry weight.

Class 3 Brick: The water absorption for class 3 brick should not be more than 25% of its Dry weight. 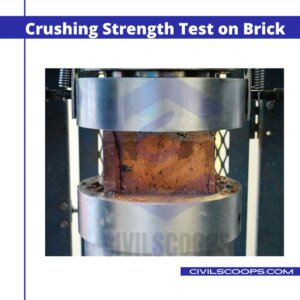 All the values of the readings at the point of crushing or note down indicate the crushing strength of the bricks. The minimum compressive strength of brick is 5 N/mm2.

The grade A brick for the 1st class brief has a crushing strength value ranging between 7 to 14 N/mm2. 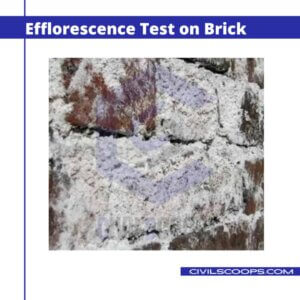 In this test, the brick is soaked or immersed in water for 24 hours and then taken out and allowed to dry completely. After the bricks are completely dry, the proper observation of the bricks is done.

There are various results are analyzed, and the bricks are classified as follows according to the area of bricks affected by efflorescence. When 10% of the exposed area of the bricks is covered with a thin deposit of salt, then the difference is Slight.

If there is a heavy deposit of salt present on the surface of the brick, or there is flaking of the exposed surface, then the bricks are in the Serious Efflorescence condition. 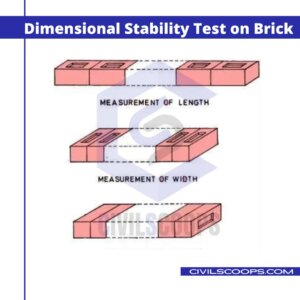 In the dimensional stability test, the bricks are wetted, and there is a change in volume and linear dimension. The resistance to change of volume is called Dimensional.

The bricks are saturated with water, indicating 0.02% linear expansion, which is normal. The bricks which undergo more linear expansion are not good for construction work, and it indicates that they are burnt. Bricks should also show dimensional stability when they are heated.

Field Tests are also one of the most important which are carried out on-site during the construction. The Field test is very helpful in determining the quality of bricks on the site. 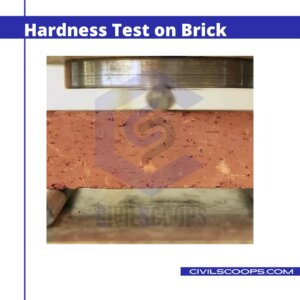 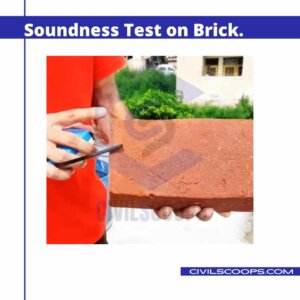 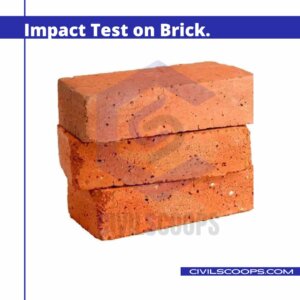 In the impact test of the bricks, the brick is allowed to drop flat from a height of 1 meter on the ground. After dropping the brick on the ground, it should not break your crush into pieces.

If the brick gets cracked or crushed into pieces, then it indicates the best quality of the brick. 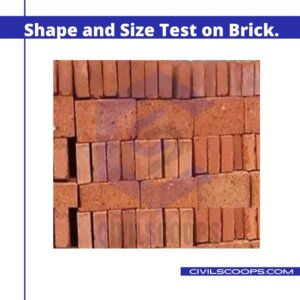 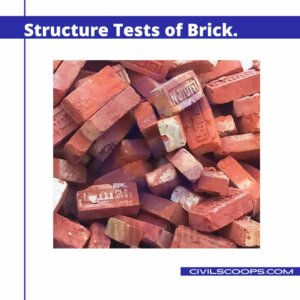 Water absorption tests on bricks are conducted to determine the durability property of bricks, such as degree of burning, quality, and behavior of bricks in weathering. A brick with water absorption of less than 7% provides better resistance to damage by freezing.

The common burnt clay shall be classified on the basis of average compressive strength as given in the table.

This test consists of partially immersing brick in distilled water for a period of seven days. At the end of this period, the brick is allowed to dry and examined for efflorescence in comparison with brick that was not immersed.

A good brick should resist scratches against sharp things. So, for this test, a sharp tool or fingernail is used to make scratches on the brick. If there is no scratch impression on the brick, then it is said to be hard brick.

The soundness test of bricks shows the nature of bricks against sudden impact. In this test, two bricks are chosen randomly and struck with one another. The sound produced should be a clear bell ringing sound, and the brick should not break. Then it is said to be good brick.

A good quality brick should not break at all. If the bricks are broken, that means their impact value is low, and they should be rejected.

Shape and Size Test on Brick

Standard brick size consists length x breadth x height as 19 cm x 9 cm x 9 cm. To perform this test, select 20 bricks randomly from the brick group and stack them along their length, breadth, and height and compare. So, if all bricks are similar in size, then they are qualified for construction work.

What Is Soundness of Cement Test?

In the soundness test, a specimen of hardened cement paste is boiled for a fixed time so that any tendency to expand is speeded up and can be detected. Soundness means the ability to resist volume expansion.

What Are the Components of Concrete?

Concrete is made up of two components, aggregates and paste. Aggregates are generally classified into two groups, fine and coarse, and occupy about 60 to 80 percent of the volume of concrete. The paste is composed of cement, water, and entrained air and ordinarily constitutes 20 to 40 percent of the total volume.

What Cement to Use for Fence Posts?

Fast-setting concrete is ideal for installing fence posts since it doesn’t need to be mixed in a bucket or a wheelbarrow. Once you’ve finished digging your post holes, add about three to four inches of gravel into the bottom and compact it using a post or a 2×4.

What Is the Difference Between Concrete and Cement?

What Is the Difference Between Mortar and Concrete?

Basically concrete is stronger and more durable so it can be used for structural projects such as setting posts whereas mortar is used as a bonding agent for bricks, stones, etc. Concrete is a mixture of water, cement, and sand just like mortar.

What Color Is Cement?

Cement essentially consists of four mineral phases: two calcium silicates, a calcium aluminate, and a mixed crystal known as calcium aluminate ferrite (C4AF). While the first three appear as pure white minerals, pureC4AF has a brown color because of its iron content. So theoretically, pure cement would be brown.

Cement as we know it was first developed by Joseph Aspdin, an enterprising 19th-century British stonemason, who heated a mix of ground limestone and clay in his kitchen stove, then pulverized the concoction into a fine powder. The result was the world’s first hydraulic cement: one that hardens when water is added.

The autoclave expansion test (ASTM C 151) is used to provide an index of potential delayed expansion caused by the hydration of CaO and MgO in hydraulic types of cement.

What Are the Main Components of Concrete?

Concrete is made up of two components, aggregates and paste. Aggregates are generally classified into two groups, fine and coarse, and occupy about 60 to 80 percent of the volume of concrete. The paste is composed of cement, water, and entrained air and ordinarily constitutes 20 to 40 percent of the total volume.