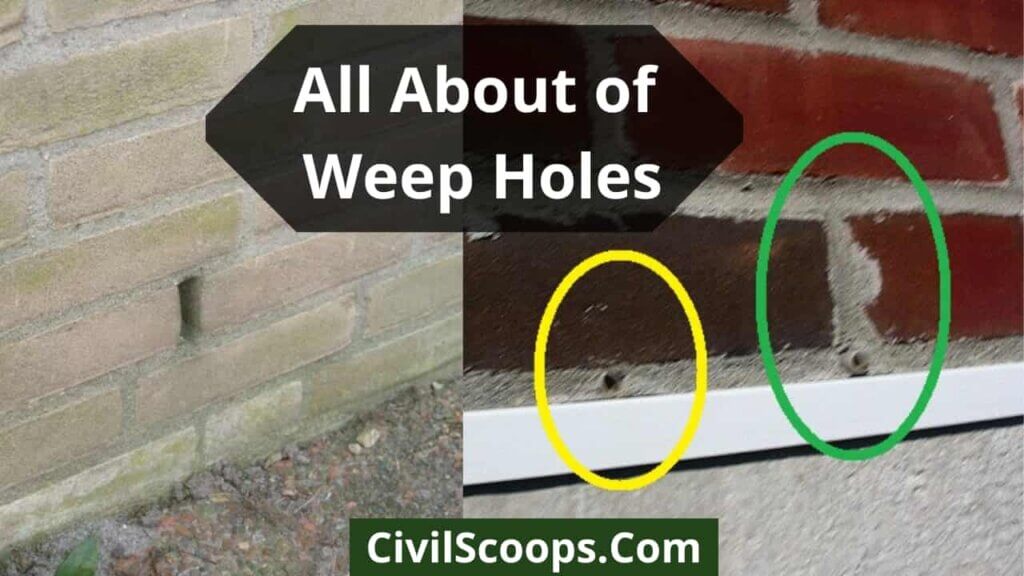 What Is Weep Holes?

A weep hole, also known as a weep brick, is a small opening that allows water to drain from a structure. The weeps are placed on the bottom of the object to enable drainage; these holes must be large enough to overcome surface pressure. The weeps could also be needed for a retaining wall to allow water to escape from the retained soil, lowering the hydrostatic load on the wall and avoiding moisture damage from freeze/thaw cycles.

In such cases, the weep is made up of small diameter rubber, clay, or metal pipes that reach through the wall to a layer of porous backfill. Weeps are often arranged automatically for water that has penetrated an assembly from under the surface.

To stop interstate condensation, it will be designed with metal windows and glazed curtain walls. Weep Holes are found in earth-retaining buildings such as retaining walls, underpasses, wing walls, and other below-ground drainage structures. 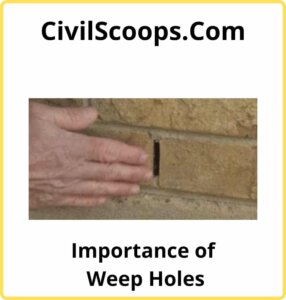 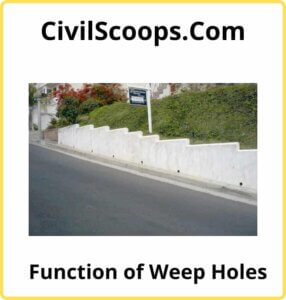 Here, the function of weep holes are as follows.

Case 1 : The water table is under the structure, so no weep holes are needed.

Case 2 : The water table should be above the framework and there are no weep holes.

Case 3 : The water table is higher than the structure, and weep holes are provided.

The type of weep holes depends on the nature of the use of the holes: 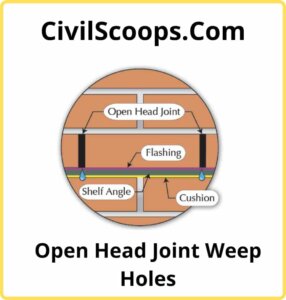 Weep holes are created by removing the mortar from the vertical joint between the bricks. The exact space between the open hand joints is performed at 21-inch intervals, and these walls are the same height as the usual joint spacing.

This is the most popular and reliable procedure for removing water from the cavity. This is accomplished by using a weathered plastic structure to avoid rain and penetration into the pores; drip is used on the front lip to aid drainage.

One limitation of this strategy would be that the open head joints produce large gaps that might not be visually pleasing. Any repair staff can even fix such holes unwittingly while noticing they are weep holes. Some materials, such as aluminum vents and plastic grids, can be placed into weep gaps to render holes less visible. 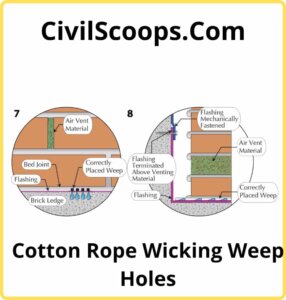 Weeps can be made of cotton wicks. In the joints, a rope up to 12 inches (30 cm) in length is mounted. The rope’s other end is stretched up through the cavity stone.

Cotton can trap moisture inside the wall and wick it to the outside, and cotton rope can wick a slight amount of moisture from the outside to the inside of the wall. The evaporation rate is slower than with weep holes. Furthermore, the cotton could catch fire. 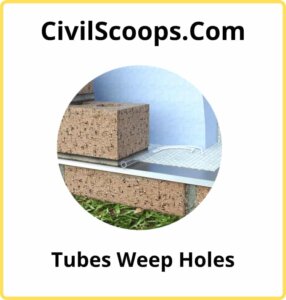 The tube weep holes are made from hollow plastic or metal pipes that are 16 inches long. The tube is angled at a slight angle to enable water to drain; however, the angle must not be too smooth. If indeed the angle becomes too steep, the gap hole within the wall cavity would be too wide to allow water to escape.

If indeed the angle becomes too shallow, the mortar sometimes used lay the bricks can fall into the cavity and clog the tubes. To save mortar from clogging the channels, a thin coat of gravel is often laid. The plastic tube’s thickness, no matter how thin, can form a small barrier, allowing water to collect within the wall cavity.

The tube style has the benefit of being less noticeable. However, the small holes can not allow enough air to circulate and vent the moisture. 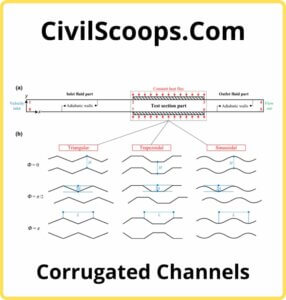 A more recent weep technology employs corrugated plastic to create weep channels/tunnels that form the bottom side of the mortar bed joint. These tunnels quickly conduct water out of the wall through several weep hole openings, ensuring that water exits at the lowest point in the wall.

Corrugated plastic weeps mix into mortar and are less noticeable than rope weeps. 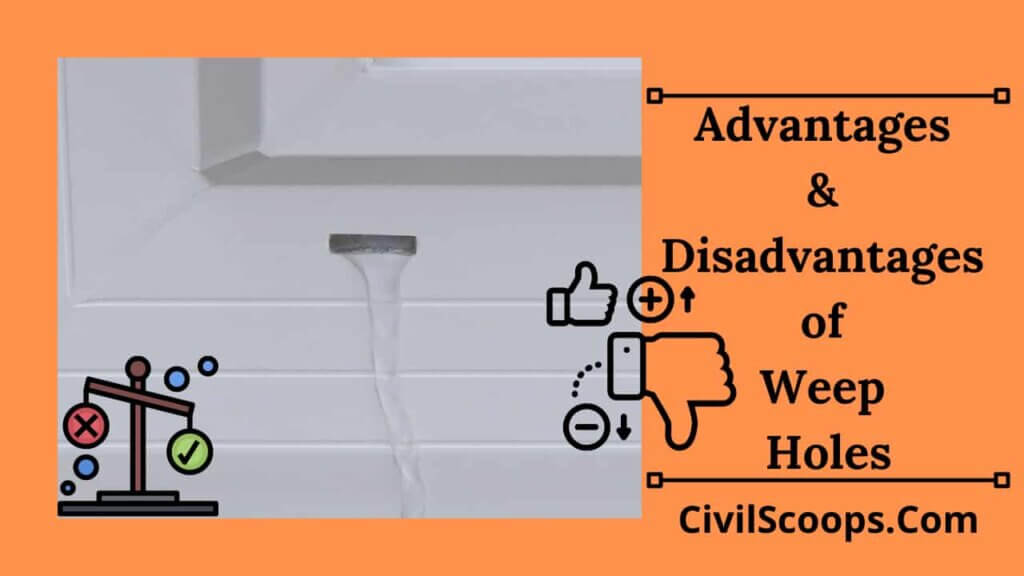 Here, the different pros of weep holes are as follows.

Here, the different cons of weep holes are as follows.

A weep hole is a passage for water to escape a building envelope. Weep holes serve an important purpose of a home; they allow the home to “breathe” as some say. Since there are many chances for water to enter the home, weep holes allow for water exit.

Although not all windows have weep holes you may see them on vinyl or metal window frames. Weep holes aren’t just there for looks, they are designed to drain water from your windows.

The excess mortar overflows into the airspace, where it hardens. When water enters the brick cavity, it can pool on the hardened mortar, and subsequently leak into the house. Also, excess mortar at the bottom of the wall can block the weep holes, preventing water in the brick cavity from draining to the exterior.

Definition. Weep holes are a vital part of your shower drain assembly. Typically, there are three such holes in the upper portion of the drain assembly, spaced evenly around the drain. The weep holes are small holes that connect to the main drain, allowing water that enters them to feed into the drainpipe.

A drill and a masonry bit can be used to drill the holes. I’d recommend a 5/8 to ¾ inch hole in each cavity. You don’t need to drill all the blocks initially. Simply concentrate on the area where water is seeping out.

Weep holes are drilled in the concrete blocks at the lowest level. Once the block has been drilled, water exits at the holes and flows directly into the drainage system. Weep holes have the added benefit of helping alleviate pressure on your foundation walls.

What are weep holes? Weep holes are tiny openings that allow water to drain from within your foundation walls. They’re usually drilled into the base of foundation walls to allow moisture to escape. Whenever water gets into the foundation, it will drip down the back of the wall and pass through the weep holes.

Seawall weep holes are created just above the waterline to release the water that accumulates behind the structure. By allowing the passage of excess water, the holes prevent hydrostatic pressure from building up on the landside of the seawall.

What is a weep hole? A weep hole is a small hole that’s drilled on the base of your foundation wall to provide aeration and an escape route for water. The weep hole also does the following: improves drainage: rainwater or moisture that gets into the concrete block or brick cavity needs to escape.

What is a weep hole? A weep hole is a small hole that’s drilled on the base of your foundation wall to provide aeration and an escape route for water. The weep hole also does the following: improves drainage: rainwater or moisture that gets into the concrete block or brick cavity needs to escape.